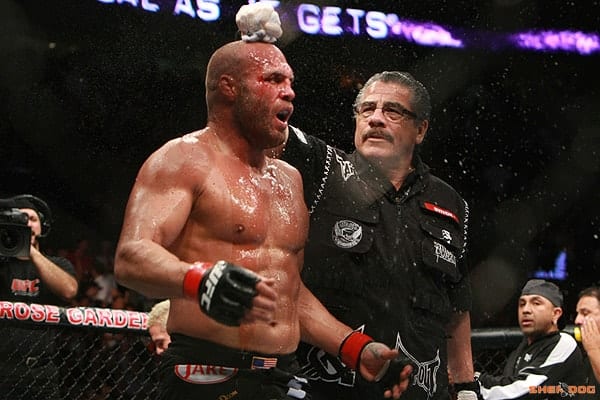 Boxing and MMA (mixed martial arts) cutman Jacob ‘Stitch’ Duran has had a bit of a torrid month to say the least. After speaking out about getting a raw deal from the UFC-Reebok partnership, Duran was promptly handed his marching orders by the promotion. Fans were in uproar about the controversial sacking of ‘Stitch’, as he’d served for many years as the UFC’s lead corner man. The decision ultimately had fans and media alike questioning the motives behind Duran’s release.

The sports giant washed their hands of the situation immediately, likely trying to save what little face they had left at this point, and ‘Stitch’ was left wondering why he didn’t have the respect of a phone call from UFC president Dana White. All this water under the proverbial bridge, and still Duran says he’d take his job back if offered. As per MMAFighting:

“Yeah, absolutely,” Duran said when asked if he was open to returning if he was asked, after being overwhelmed with support from fans, media, fighters, managers and sponsors over the past few days. “I’m the kind of guy, I’m not going to have hard feelings. I think it was a knee jerk response. I don’t think the UFC realized they picked on the wrong guy. I bring more to the table than just wrapping hands and working on cuts. The fans, the fighters, the trainers, even people within the organization, and commissioners, have called me. They should understand I bring a lot more. If they called me tomorrow, I’d be more than willing to sit down.”

Now set to debut for the WSOF (World Series Of Fighting) organization in August, it’s apparent that a cutman of Duran’s calibre will never be short of work, but there’s an overbearing opinion that the UFC needs a man with the experience and knowledge that ‘Stitch’ possesses. Ever the level-headed character, Duran says it only takes two words from the UFC to bring him back:

“If I was a doctor, my prescription would be two words, `I’m sorry.'”

Then, interestingly, ‘Stitch’ drops a bombshell regarding Ray Sefo and WSOF:

“He (Ray Sefo) called me for the first World Series of Fighting show, ” said Duran. “He asked me to help him out, me and Don House. The next thing, I get suspended for five fights from UFC for helping them out. One of their attorneys said that I gave them credibility. When Ray was one of the first guys who called me, out of respect, I told him, ‘I owe you this.'”

Wow, so this wasn’t the first time that the Zuffa brass had taken offense to Duran’s actions. Perhaps the flub with WSOF in the past led to his eventual sacking over the Reebok comments. Duran goes on to explain how the whole deal went sour once the sports apparel company became involved:

“It was pretty simple, about a year ago, we were notified that we’d be losing our sponsors, me in particular, me and four of the senior cut men,” said Duran. “We were the ones on the prime fights, and we’d be wearing Reebok gear. Throughout that year we tried to meet with UFC to see if there was any way we could be compensated and the answer was always `No.’ I did an interview the other day, the question was asked, I answered it, and I guess the UFC didn’t like it. I got a call from  one of my friends, they’re all friends of mine in UFC, his voice was trembling a little and he said, `They don’t want you to work anymore UFC events because of the article you did on Reebok.'”

“Was I shocked? Yeah,” he said. “When I got the call, I thought they might say, `You know what, we’re going through this Reebok deal and maybe you should tone down your comments.’ Worst case scenario, that’s what I expected. But to get told you’re not working anymore UFC events for that article, that blew me away.”

“That changed my life,” he said. “So if there’s anything that bothers me, it’s that Dana didn’t come forward and say, `We don’t have a place for you and goodbye.’ I could have respected that.”

This whole messy scenario has left a bad taste in many mouths, perhaps none more so than Wanderlei Silva. ‘The Axe Murderer’ came out and accused the UFC of fight fixing in the aftermath of Duran’s sacking, and who knows what is around the corner in that storyline.

So, we ask you again, has Duran been dealt a raw deal?