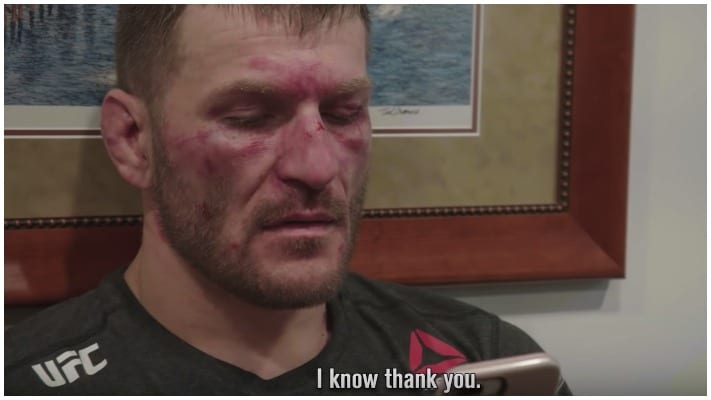 UFC 241 was a momentous occasion for Stipe Miocic and for more than one reason.

Miocic regained his heavyweight title from Daniel Cormier after knocking him out in the fourth round of their UFC 241 headliner this past weekend.

The Cleveland native was dominated for much of the fight and clearly behind in the scorecards. However, he rallied and with an adjustment that saw him go for Cormier’s body more, eventually came away with the TKO victory.

Miocic is now a two-time heavyweight champion while he also reestablished himself as the greatest in his division. The news would only get better from there on out. Speaking after the win, Miocic learned that his dad was cleared of his cancer. He would dedicate his win to him before joking about the casual way his dad announced the news.

You can watch Miocic interact with his dad as well as the entire sneak peek of UFC 241’s Thrill and the Agony below. The video also features Nate Diaz, Anthony Pettis and some reactions from Miocic’s coaches:

What did you think of the video?