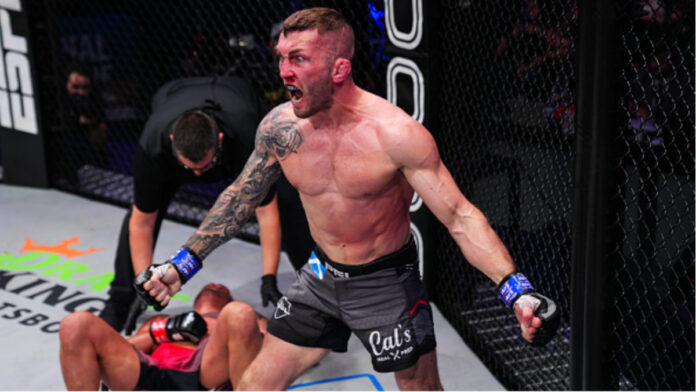 After a stunning submission over Anthony Pettis, Scotland’s very own Stevie Ray stopped by to speak with us at LowKick MMA about the thrilling victory at PFL 5.

There was some confusion on what the submission that finished Pettis precisely was, as it was such a rare and unique technique that even the commentators weren’t quite sure what it actually was. Thankfully, ‘Braveheart’ cleared that up for us.

“So, it’s a modified twister,” Stevie Ray clarified. “I land it in the gym a lot, it’s a move that I use… Last year I was on Polaris… I submitted another guy, Craig Ewers; a BJJ, and Judo blackbelt, and I got him with it… It was a little bit different because it’s the same from the body triangle with the leg on the inside, but when I did it with Craig Ewers, I done it a little bit more of the traditional way. Like I went under the head, and I’m side on, but it’s still from the body triangle.”

“So yeah, and the other way, again: is when they come up on top,” Ray continued. “And in MMA… they (the opponent) will try and come up on top more often because they’re thinking they’re coming up in a guard…”

“It’s a legit move. I planned it. When I had his back, I knew he did that escape. So, at one point I was kind of a bit: ‘Should I let him do it? Should I try and rear-naked choke him?’ and then I was like, ‘You know what, I’m gonna let him come up, and give him it.'”

“Everyone at my gym Higher Level MMA, at home, as soon as I got the body triangle they knew that I was probably gonna hit that. Even though I’ve got to be a bit careful with it in the gym because it’s obviously a brutal submission, I’ve landed it a lot, on most of my training partners.”

Watch the full interview below:

Stevie Ray finished Anthony Pettis 3:57 into round two and proved that bettors were wrong to have him be such a sizable underdog leading into the fight. Now, ‘BraveHeart’ advances into the PFL playoffs, where he meets Anthony Pettis again for a rematch.

Do you think Stevie Ray will defeat Anthony Pettis in the rematch?