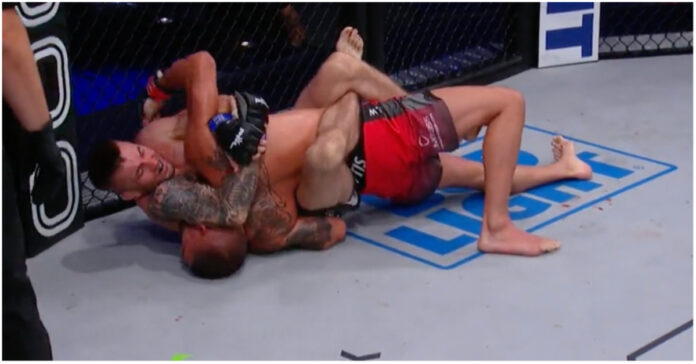 Pettis, a former UFC lightweight champion, went into the fight with Ray as a -200 betting favorite. However, Ray would pick up a massive upset victory in truly impressive fashion.

The first round was a competitive affair, with Pettis attempting to put a stamp on it at the end with a typical ‘Showtime’ spinning kick.

However, in the second round, the fight would hit the canvas. Despite Pettis being in top positon, Stevie Ray was able to lock in a modified submission, which some are calling a twister and others a body lock. Regardless of its name, the unique submission attempt was successful and Anthony Pettis was forced to tap out.

This win secured Stevie Ray’s place in the PFL Playoffs, alongside Olivier Aubin Mercier, Alexander Martinez, and Anthony Pettis – who had already secured his place in the playoffs with a first-round finish over Myles Price, prior to the fight with Ray.

Despite Stevie Ray being priced by the bookies as a +250 underdog, his win was far from the biggest upset on the card.

Heavyweights Bruno Cappelozza and Renan Ferreira were both massive favorites to win their respective bouts. However, both men were handed shocks losses, as Matheus Scheffel and Klidson Abreu both ground out tough decision victories.

On the preliminary card, Juan Adams was also able to pick up an underdog victory, TKOing Sam Kei inside the difference.