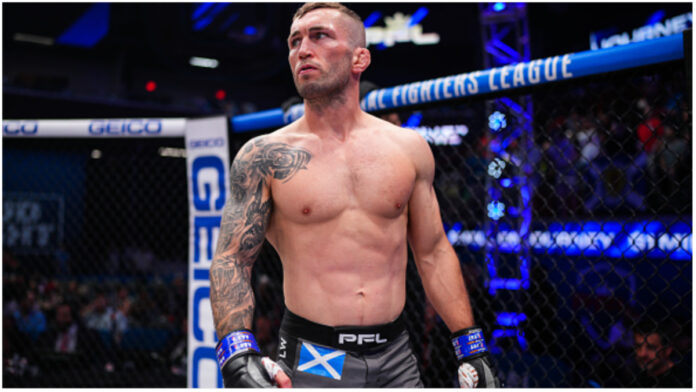 After an action-packed night of fights at PFL 5, Stevie Ray has moved on to the PFL playoffs, where he will face legend Anthony Pettis in a rematch.

After his fight at PFL 5, Stevie Ray made the time to chat with us at LowKick MMA, discussing his finish over Pettis, the rematch, and how he would like to face Alex Martinez in the final fight for the $1 million prize.

“There’s four guys in the tournament,” Stevie Ray began. “One’s beat me (Alex Martinez), and I’ve beat one of them as well (Anthony Pettis). Like I said, I do believe ring rust played a factor in the Martinez fight.”

“I also made some mistakes, like fight IQ and decisions. Like chasing the legs, took too long… Martinez is a good fighter, and he’s a really good guy as well. He’s a really nice guy. He’s one of those guys that, I may be being biased here but, I feel like if I fought him ten times, I’d beat him nine. And he’s obviously won the first one. He’s a good, tough fighter. But I feel maybe I gave the fight (the first one) away.”

“I’ve got Pettis first. I’ve got to get through him again,” Stevie Ray continued. “I cannot look past him. That will be my main thing, just focusing on him. Because he’ll be wanting payback… So, the plan is to beat him again, which I believe I will. Then, I’d like to get my rematch with Martinez. Just to tick that one-off. But, yeah. I’d be happy with whoever.”

‘BraveHeart’ would continue on, talking about how happy he is in the PFL, despite him “spoiling the party,” by defeating Pettis at PFL 5. When asked if it gave him a chip on his shoulder, that PFL favored Pettis with promotional push, he’d say that it did a little.

“To start with I was going to say not really… But, yeah, I suppose a little bit. Because If you go and look on paper, at some of the guy’s I’ve beat, I feel like I’ve maybe not had the push maybe that I’ve deserved… But, hopefully, that’s not the case. Hopefully, that’s what I get now. Hopefully, I’ve kind of just unlocked it now… I said that to Ray (the owner of PFL) as well, I’m your new guy… I always come to fight, I always push for the finish.”

Stevie Ray finished Anthony Pettis via modified twister at PFL 5, but there’s no telling what happens when they rematch in the playoffs. Anthony Pettis is now 2-3 in his last five, and this rematch with ‘BraveHeart’ will no doubt be extremely pivotal.

Check out the full interview below!

What do you think happens when Anthony Pettis and Stevie Ray throw down for the second time?