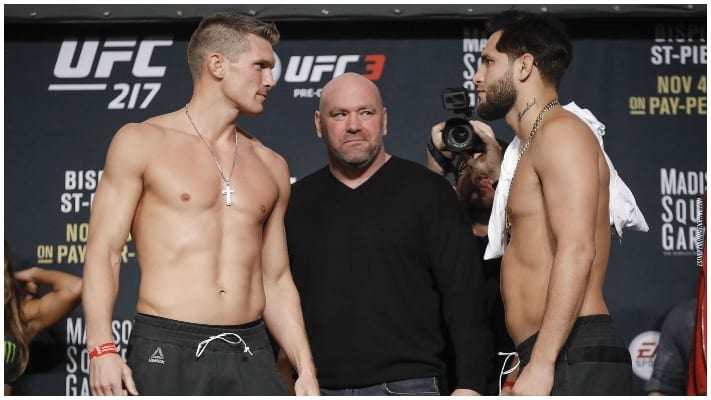 Stephen Thompson is targeting a rematch with Jorge Masvidal.

Thompson looks to make it two wins in a row when he takes on the dangerous Geoff Neal in the UFC Vegas 17 headliner this weekend.

A win would certainly put the former title challenger back in contention to possibly get a third crack at the welterweight strap.

After all, “Wonderboy” has long spoken of wanting to face a top-five opponent and should he get the victory this weekend, he wants to throw down with Masvidal again.

“My last two guys I fought were ranked number 11, so I think with a good win over Geoff Neal, the UFC’s like ‘You know, let’s give this guy a top five guy,’” Thompson said in a recent interview (via Middle Easy). “I know that Jorge Masvidal has considered fighting me in the past, recently, and try to get that win back. So he’s definitely at the top of the list, would love to see that fight.

“I know him and Colby Covington, there’s talks about them fighting but nothing on paper yet. I think a good win over Geoff Neal puts me in that limelight to face somebody in the top five, and hopefully in 2021, my goal is to be champion.”

Thompson, of course, comfortably outpointed Masvidal when they met on the main card of UFC 217 back in November 2017.

However, Masvidal has come leaps and bounds since then and has also become one of the most popular fighters on the roster. Not to mention, he is currently ranked one spot above Thompson at No. 4.

A rematch between the pair would also be a clash between the NMF and BMF and it would definitely be interesting to see how things go a second time.

Would you like to see this fight next? Who wins?