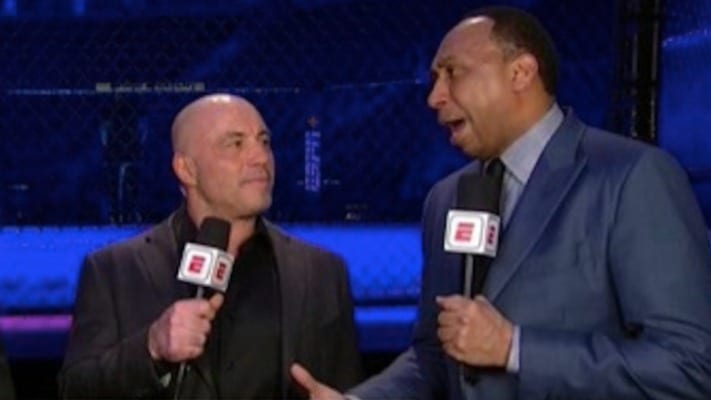 Stephen A. Smith is not a fan of women in combat sports.

The polarizing ESPN commentator recently appeared on a podcast and when asked how he felt about the increasing role of women in sports executive roles, Smith was all for it.

However, he also proceeded to go on a tangent about women in combat sports — something he would prefer not to see (via MMA Junkie).

“First of all, I love it. I think that there’s an awful lot of women that are incredibly qualified to do the jobs that they’re doing. Where I jump off the bandwagon is when they try to engage physically. For example, I don’t ever want to see a woman boxing a man. I don’t want to see that. I don’t want to see a woman in the UFC fighting a man even though there are some women out there that’ll kick a dude’s butt. We get all that.

“When I think about pugilistic sports, I don’t like seeing women involved in that at all. I just don’t like it. I wouldn’t promote legislating laws to prohibit them from doing so, but I don’t want to see women punching each other in the face. I don’t want to see women fighting in the octagon and stuff like that, but that’s just me. What I would adamantly be against is them fighting men. I don’t think that’s cool. Plus, you don’t ever want to give men license to believe that it’s all right to be physical with a woman, to be quite honest with you. You don’t want to do that.

“And so, outside of that, when you think about them in executive positions, first of all they’re smarter than (men) a lot of times, they’re more composed than us a lot of times, they’re incredibly knowledgeable about these respective sports. They’ve had to go through trials and tribulations one couldn’t even imagine most of the time. For them to get to that point, they deserve the opportunity to showcase their skill sets. Just like we have women in corporate America doing an incredible job leading companies, being executives, pushing businesses forward, etc., etc. There’s no reason on earth why they can’t do the same in the sports world. I support it, I’m a fan of it, and I hope we see more of it.”

These comments naturally drew plenty of criticism from many in the combat sports world.

However, it’s not a surprise either as Smith has regularly come under fire for his opinions, particularly when it comes to mixed martial arts.

Regardless, what do you think of his latest remarks?