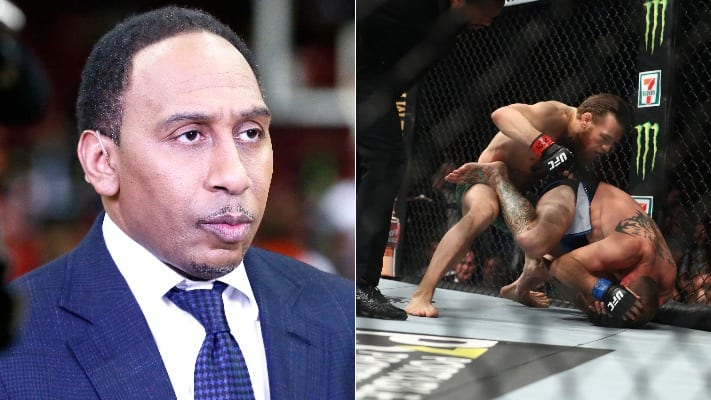 McGregor only needed 40 seconds to take out “Cowboy” after some nasty shoulder shots, a head-kick, and ground-and-pound. With the loss, the narrative that Cerrone can’t win the big fight continues. There was a lot of criticism thrown at “Cowboy” for his performance last night, but it was comments from ESPN’s Stephen A. Smith that really got people’s attention.

Speaking on the post-fight show on ESPN+, Smith had some harsh words for the longtime mixed martial arts (MMA) veteran. (H/T MMA Junkie)

Smith then questioned if Cerrone was even prepared to fight McGregor in what was certainly the biggest fight of his career.

“You know the difference between a fighter that’s calm, cool, collected, and ready for the pressure, and it’s out-weighed by somebody that’s clearly in over their head? When you look at ‘Cowboy’ Cerrone, that was not a guy that was prepared to fight tonight. We knew Conor was going to be prepared,” Smith said.

“We knew Conor was going to be ready. We wondered whether or not he would take him out early. Obviously as the fight goes on, ‘Cowboy’ Cerrone is the bigger, stronger guy – supposedly. For him to be hurt in 15 seconds, get away from the clinch, and still just let Conor right back at him? Come on. You’re smarter than that, except for tonight.”

What do you think about Smith’s criticism of Cerrone?