LowKickMMA.com
Home UFC News St-Pierre: We Need Nick Diaz In The Sport & I Want To... 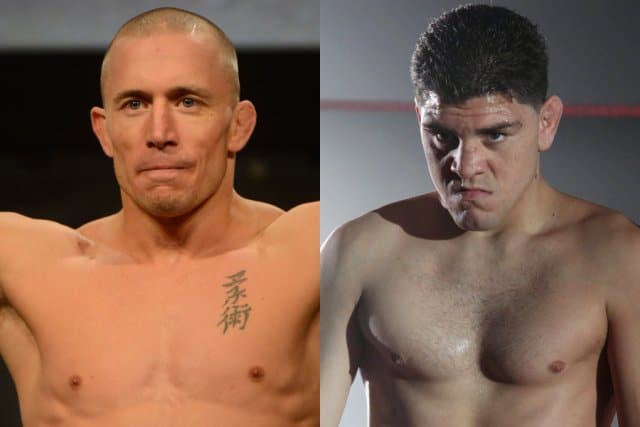 Former UFC welterweight champion Georges St-Pierre shared a bitter feud with Nick Diaz in the lead up to their fight in 2013. A lot has changed since that time though, ‘Rush’ has exited the sport and vacated his title, and ex-opponent Diaz has been sent to the sin bin for the next five years. Two of the sport’s biggest draws gone for the foreseeable future, and that stings a little.

St-Pierre has become an advocate for stricter drug testing in the sport of MMA, so it’s quite surprising to learn that the Canadian star is taking a stance against the Nevada Commission’s five year suspension of Diaz. The Stockton bad boy got popped for Mary Jane for a third time after UFC 183, but GSP feels the NAC acted far too harshly against Diaz. As per Canadian news outlet RDS, and quoted by MMAJunkie.com:

“Personally, I think five years is a lot, especially if you compare his case to Anderson Silva or other athletes who got caught cheating and received a lighter suspension. I think they wanted to use him as an example because of how colorful he is and of the attention he gets. They wanted to create a precedent similar to what has been done in Olympic sports with Marion Jones, for example.

“Unfortunately, it happened to fall on him, but I think everyone is entitled to a second chance.”

Bas Rutten recently explained how he thought Diaz’s sentence was fuelled by prejudice and emotions, two things that should really be left out of such a serious decision making process. It seems now that the only thing to potentially get the ex-Strikeforce boss out of trouble is support from the mixed martial arts community, and Cher of course. GSP continued:

“This is a drug, yes, but I think there should be different penalties for certain products that competitors use, because then it does not really make sense,” St-Pierre said. “Marijuana can help a person suffering from anxiety, but it cannot make you physically stronger or more powerful, more efficient. The sanctions should not be as severe.”

“Nick is a very charismatic, he makes a lot of attention, but it’s not someone I hate. I have no hatred toward him,” St-Pierre said. “Many things had been said before our fight, but it was only in sporting terms. I did not take anything personal.

“We need guys like him in the sport, and I hope he will return soon. If I can help in one way or another, without getting in trouble, it’ll make me happy to do so. This is someone that I like, and I wish him the best of luck.”

It what bizarro world does Georges St-Pierre back up Nick Diaz‘s plight? Who knows what’ll happen next, but Diaz’s fighting future is essentially out of his hands for the moment.