LowKickMMA.com
Home MMA News St. Pierre: If Everyone Was Like Me, The Sport Would Be Boring 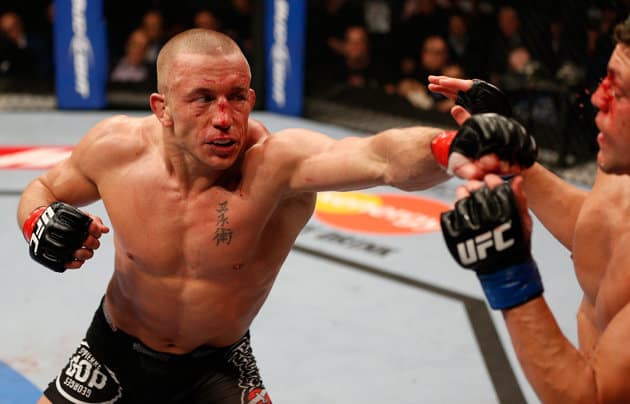 Despite being known as one of the most dominant fighters of all time, semi-retired former welterweight kingpin Georges “Rush” St. Pierre is also known as one of the classiest and most respectful fighters in UFC history. However, that doesn’t mean that “Rush” thinks everyone should follow his approach to the fight game.

Recently speaking with the media (Via FOX Sports) the former long-time champion stated that although he tried to always be the “good guy” so to say, his favorite fighters are actually the trash talkers and the “bad guys”. St. Pierre specifically noted Tito Ortiz, who many hated for his talk and arrogance, as a fighter he was a huge fan of:

“As much as I try to be a good role model and a nice guy, my favorite fighters are the bad guys,” he said.

“I like the villains. Like in Star Wars, I like the Sith Lord better than the Jedi (laughs). They are way more charismatic. I like [former UFC light heavyweight champion] Tito Ortiz because I think he should be a legend of the sport. He is one of the greatest for what he did for the sport. He brought awareness to the sport. Everybody used to watch Tito Ortiz and everybody used to hate him back where I was. They hated him because he was a very arrogant guy and he used to dig a grave. But, I liked Tito Ortiz.”

Continuing on, St. Pierre stated that fighters like Ortiz and other famed trash talkers such as Conor McGregor and Chael Sonnen are actually very nice guys. “Rush” said some fighters need to talk trash or hate their opponents although he never had to:

“If you talk to Tito Ortiz, he’s a very nice guy. It’s just that some guys, when they fight another guy they need to put in emotions to give themselves the extra energy to fight. I don’t need to do that,” he said.

“I don’t work like this, emotionally. I don’t need to hate my opponent. Some guys I dislike more than others, and some I like more. I try not to get attached to them. I don’t need to be disrespectful or saying anything. But, some guys that is what they do. They need to do that. It doesn’t mean they are a bad person. Like Conor Mcgregor, very nice guys, the nicest guy in the world if you meet him. Tito Ortiz, same thing. Chael Sonnen, same thing.”

Ortiz, McGregor, and Sonnen are amongst the best fight promoters the sport has ever seen, and GSP says that this is a good thing. The Canadian also claimed that if every was classy like he was, that the sport would be boring:

“But, their characters, when they fight someone they like to put some animosity to promote the fight. And that is good, if everybody would be like me, it would be a very boring sport. It would be the most boring sport in the world. And if everyone was bad, then it would be bad, too. We need to have different personalities.”

Do you agree with St. Pierre, does MMA need its “bad guys”?