LowKickMMA.com
Home UFC News Six Pitfalls From Mayweather vs. McGregor That Ruined 2017 For The UFC 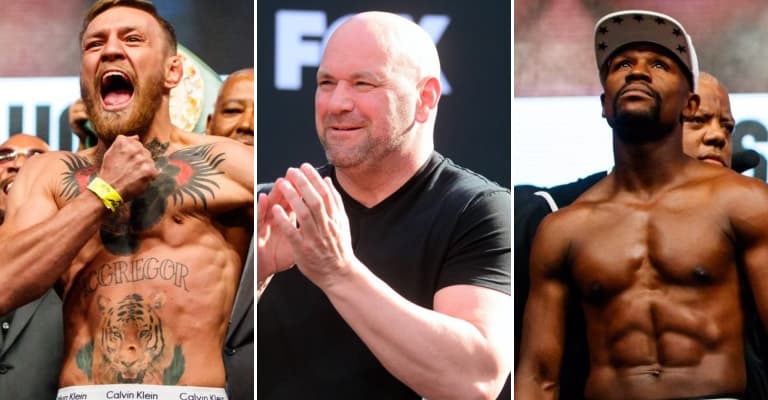 What will amount to by far the biggest combat sports event of the year has also cast a long and dark shadow over mixed martial arts (MMA) ever since boxing legend Floyd Mayweather and UFC lightweight champ Conor McGregor boxed for ten rounds in August.

Now several months removed from that epic showdown, it’s clear now that interest in the UFC’s most recent offerings has been lukewarm at best, and almost nonexistent at worst. Whether due to weak cards or general burnout, the UFC’s cash grab with McGregor vs Mayweather has had serious implications on their product ever since, and that may take months to for UFC owners WME-IMG to fix, if they are ever able to.

We took a look at the six main reasons why this crossover event essentially ruined an entire year of MMA for the UFC.

The rationale behind Mayweather vs McGregor was that this was the fight fans wanted to see, so this is what we’re giving them. While for casual fans that may be true, the nonstop promotion of the event has led to a kind of burnout that has robbed the rest of 2017 of ratings and viewership.

UFC Fight Night: OSP vs Okami did terrible numbers for a free card, even being beaten by Bellator’s event that same weekend in terms of viewership. In fact, almost all of UFC’s cards have suffered from lagging PPV sales and ratings with the exception of UFC 214, which will possibly be Jon Jones’ last gasp as a UFC star.

Casual fans, the coveted demographic that yields a strong influence over WME-IMG’s decision making, spent $100 for Mayweather vs McGregor, and haven’t really spent a dollar towards combat sports since then (perhaps with the exception of Golovkin vs Alvarez in some cases).

Non-hardcore fans are tired of the fight game for the time being, and while that will change, it will take the right card to get them to order a pay-per-view.