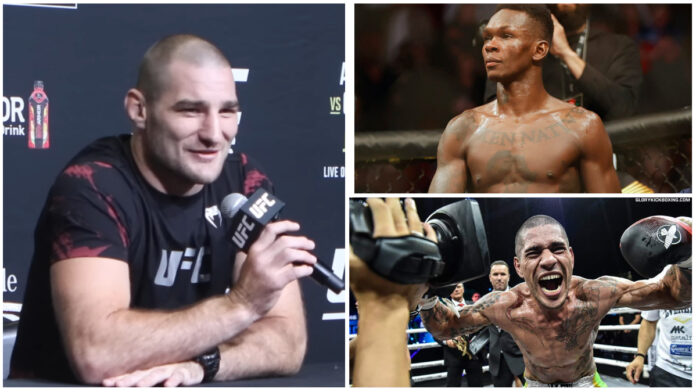 Sean Strickland believes that the UFC is trying to set up a potential fight for Alex Pereira with Israel Adesanya.

Alex Pereira will compete against Sean Strickland this Saturday at the T-Mobile Arena in Paradise, NV on July 2 at UFC 276. The international week main card will be headlined by the reigning UFC Middleweight champion Israel Adesanya who will face Jared Cannonier in the main event of the night.

In a four-man eliminator-style tournament, the winners of each bout are expected to collide next.

Sean Strickland is not a fan of the official rankings

Strickland, the current fourth-ranked contender at middleweight, does not seem to be a fan of the official rankings. The UFC veteran has been competing under the banner for close to a decade having debuted in March 2014. He picked up momentum with a six-fight win streak and outrageous takes that made headlines.

Meanwhile, Pereira has only two outings in the promotion and is already being touted for a title shot against Israel Adesanya based on their history.

At the UFC 276 media day ahead of the event, Sean Strickland shared his take on how important the rankings are. His sentiments might stem from the fact that the matchups aren’t strictly based on rankings as a storyline is often given priority over an opponent with a better spot on the list.

Strickland believes that he was pitted against ‘Poatan’ due to his striking style. Having the former Glory double champion take on an established grappler in an MMA fight would’ve been a huge risk for the promotion as a loss could nullify the prospect of him challenging Adesanya.

“He’s the one that knocked out Izzy so it’s like here’s what you can do,” Strickland said. “You could have him go and then he’ll eventually fight a wrestler who’ll take him down and beat him. Then they’ll never get the easy shot or they could be like, ‘hey, why don’t we have him fight Sean? Sean doesn’t like to wrestle. Maybe if he beats him we could float him to the top.

“So this is literally, purely just a ploy by the UFC, putting him against someone who likes to strike to potentially get him an Izzy shot. UFC, I applaud you but I might f**king wrestle.”

The winner of Sean Strickland vs. Alex Pereira is expected to face the winner of Israel Adesanya vs. Jared Cannonier in their next outing. However, things could change based on who comes out on top of those contests.