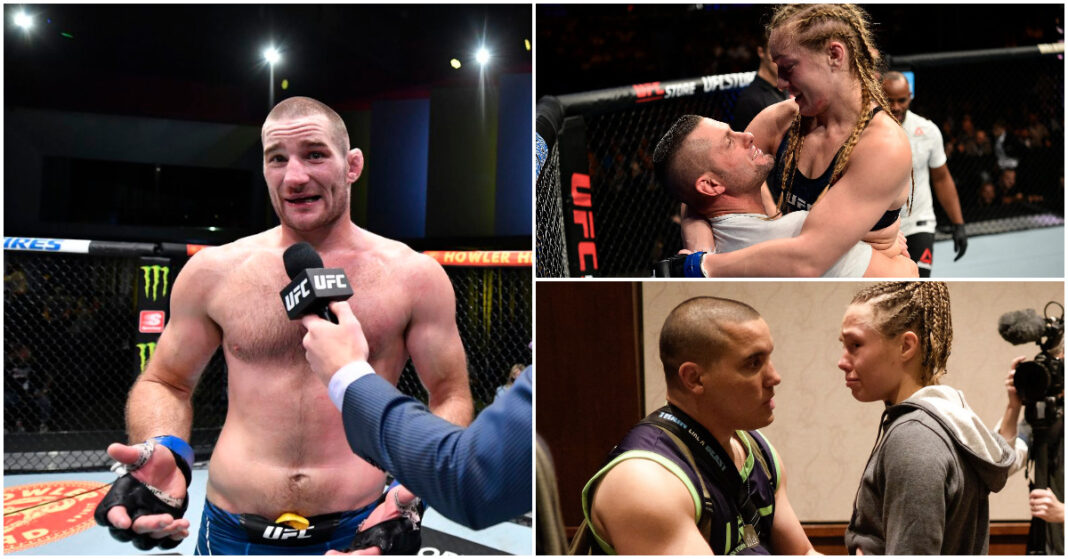 UFC women’s bantamweight Ladd faced heat from certain fans for her relationship with coach Jim West after he lambasted Ladd between rounds in an unsuccessful effort against Norma Dumont last year at UFC Vegas 40. Former UFC women’s bantamweight champion Miesha Tate spoke out against what she believed to be “abusive” treatment towards Ladd, who later defended her coach and dismissed Tate’s comments as attention-seeking.

While there have been no further developments regarding Ladd’s relationship with West since he apologized for his behavior, Strickland revisited the topic with his opinion surrounding the controversy.

“Sooooooooooo I’m pretty sure @TheAspenLadd is suffering from Stockholm syndrome…….. lmao!!!!!!!!I didn’t really care about the corner
video but when you add some other facts to the situation it’s a little fucking creepy lmao!!!”

“Women are very easy targets for male coaches, automatically assume weird father role which turns into a hero worship complex. The fact you started to train with him at what 12? 100 percent grooming sexual predator. Tell me my facts are wrong and I’ll apologize now. @TheAspenLadd“

Sean Strickland weighs in on Namajunas’ relationship with her coach

After taking shots at Aspen Ladd and her relationship with her head coach Jim West, Strickland dragged in the relationship of current UFC Women’s Strawweight Champion Rose Namajunas with coach Pat Barry. Namajunas has endeared herself with the fans through an inspiring journey in the octagon that saw her become a two-time champion.

While Rose’s main MMA coach is the highly renowned Trevor Wittman, it’s her relationship with longtime partner Pat Barry that draws the wrong kind of attention given the 13-year age gap between her and the former UFC fighter and kickboxer Barry. She was 14 years old when she reportedly met Barry, who was 27 years old at the time.

“Is Jim West and Pat Berry (sic) the Weinstine of MMA? Or is Michael Jackson a better comparison…@netflix is currently contacting @TheAspenLadd and @rosenamajunas for a TV series lol!!!!! OK, I’m done gotta spar..”

Strickland ended the series of tweets with an indication to go and practice for his upcoming bout against Alex Pereira at UFC 277. Pereira holds two wins over the current middleweight champion Israel Adesanya in kickboxing and remains the only man to knock out ‘Stylebender’. With the history between the two, Strickland expects to get a title shot if he beats Pereira at the end of July in what many consider to be a top contender contest.

What are your thoughts on Sean Strickland’s comments regarding the relationships of Rose Namajunas and Aspen Ladd with their coaches?