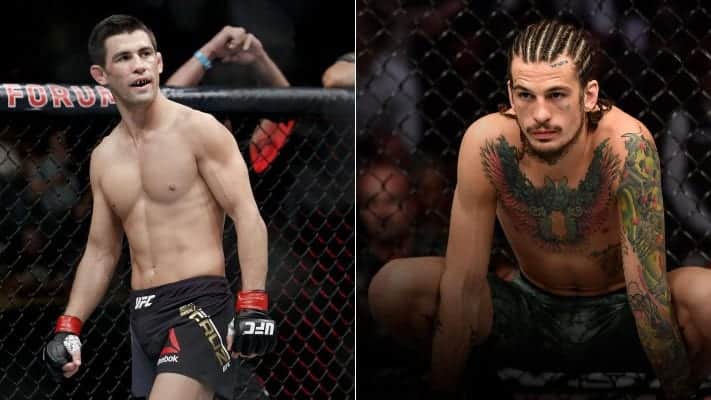 Hot off the heels of a clinic of a victory over Thomas Almeida at UFC 260, Sean O’Malley already has his sights set on a new matchup.

Even as the dust was settling following the third round TKO, former bantamweight champion Dominick Cruz was already texting Chael Sonnen about how he’d like to face ‘Suga’ Sean next. Cruz is coming off a decision win over another rising prospect in Casey Kenny.

On the Pat McAfee Show, O’Malley was asked who he’d be interested in fighting next. The ever vocal American stated the following:

“The second after you fight the question is, who’s next? I heard Dominick Cruz texted Chael Sonnen saying he wanted that fight. So, I don’t know if Chael got a prank text for a fake Dom or if that’s real. That’s a potential matchup.“

“I know Dustin Poirier tweeted the other day, July 10, so I think I’m a pretty good co-main event type dude,” O’Malley continued. “Dustin vs. Conor, Suga vs. Dominick, I don’t know, that makes sense, that might be it. July, we’ll see. I definitely want to get in there a couple more times this year” (Transcribed via BJPenn.com).

The fight would seem to be mutually beneficial for both fighters. O’Malley would get the opportunity to test himself against a true veteran of the 135lb division. Whilst Cruz would be able to catapult himself back into the limelight with a win against such an exciting prospect.

The placement of the fight would also seem to make perfect sense. McGregor PPV cards do not typically feature co-main title fights, so Conor does not have to split the PPV buys. However, a fight like O’Malley vs Cruz would no doubt only serve to bolster the hype of the card, without impacting McGregor’s payout.

What are your thoughts on Sean O’Malley vs Dominick Cruz? Let us know in the comments.