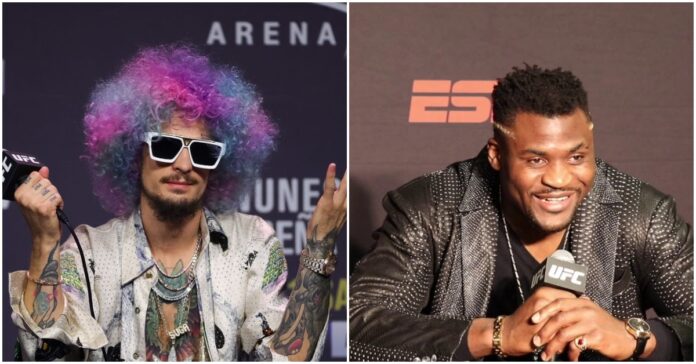 Sean O’Malley believes that Francis Ngannou made things worse with the UFC by talking sh*t about his boss, Dana White.

Over the past few weeks, the well-documented feud of Francis Ngannou Vs the UFC has been a contentious topic amongst the MMA community. Many believe that ‘The Predator’ is entitled to the contract he is asking for and are being supportive as the heavyweight king pursues a fair deal

One UFC star however believes that Ngannou did not do himself any favours in the way he handled the situation. Sean O’Malley shared his views on the situation via his YouTube channel.

“It makes sense that—Dana is running a business, and his heavyweight champion. O’Malley said,  “The one who is the main f—king champ, the baddest dude on planet earth, is just every interview he gets, talking shit.

“Imagine he’s the heavyweight champion of the world, him and Dana have a great relationship. I bet there’s leeway there to make some negotiations, but now it’s not happening.” (Transcribed by BloodyElbow)

Will Francis Ngannou Fight In the UFC Again?

Following Ngannou’s win over Ciryl Gane at UFC 270 there had been much debate on the Cameroonian’s future. Although it was Ngannou’s last fight on his contract, his contract was automatically extended because of the ‘champions clause’ in his contract.

This would mean that Ngannou would need to wait out his contact for an additional 12 months until 2023. But this clause coincides with Ngannou actually needing time off as it was revealed that Ngannou had suffered a torn MCL and a damaged ACL in the lead up to his last bout.
This serious of an injury would put Ngannou out for around nine to 10 months, per his manager meaning he would only have a two-month gap left of his contract to wait out until he became a free agent.

It would also give the UFC 10 months to renegotiate but it isn’t clear on if the two parties will be able to come to terms.

Do you agree with Sean O’Malley? Did Ngannou not help himself by bad mouthing the UFC?