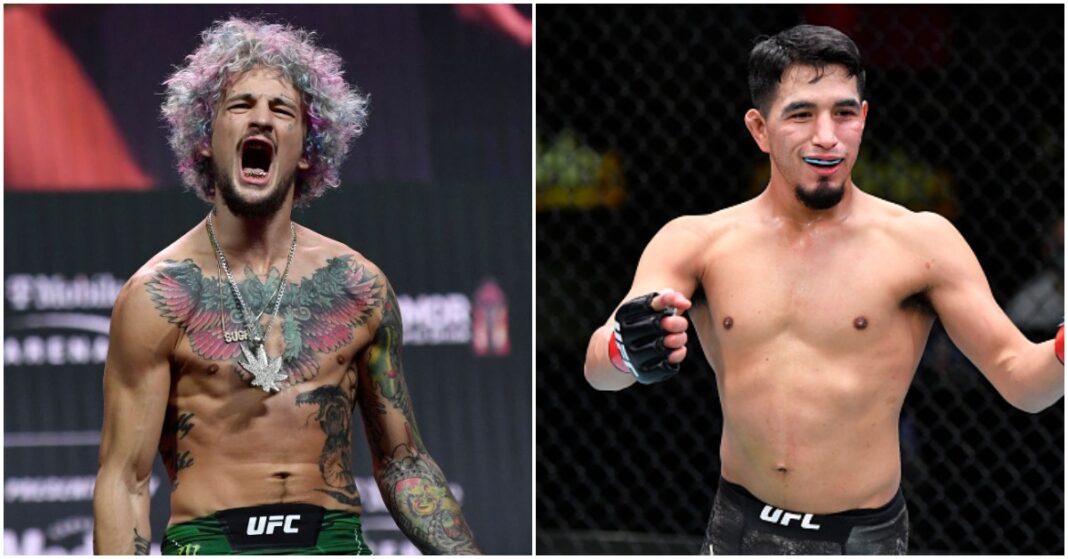 Sean O’Malley wants to fight one of the big winners from UFC Vegas 43.

Adrian Yanez picked up the biggest win of his career last night after three hard rounds with ‘Dangerous’ Davey Grant. It was a close fight that earned both men an extra $50,000 in bonus money.

While watching Yanez pick up a split decision win, ‘Suga’ sent out a cryptic tweet that suggested he wants to face the rising bantamweight prospect next year. O’Malley later confirmed that he wants to fight Yanez in the first quarter of 2022.

O’Malley has work to do before he can even think about a fight with Yanez. ‘Suga’ will square off against #15 ranked bantamweight Raulian Paiva at UFC 269 on December 11.

“Yeah, I would definitely fight Sean O’Malley,” Yanez said at the UFC Vegas 43 post-fight press conference. “Right now he says he wants to get a ranked opponent and all that stuff but he’s dodging all these other ranked opponents. Let’s dive into that one right quick.

“So, Sean O’Malley says, ‘OK, let me go out there and let me fight a top-ranked opponent.’ But then he gets Thomas Almeida, who was on the shelf for a couple years. Then he gets on a (losing) streak and he knocks him out. But it takes him three rounds to do it against the guy that is coming off the coach (Kris Moutinho). Talk about that. And then also, Eddie Wineland, who was also kind of just like off the couch for a long time, already at the tail-end of his career. (He) knocks him out. OK, cool. That kind of doesn’t really get no brownie points from me.”

Yanez believes his win over Grant is better than any of O’Malley’s.

“If you go out there and starch someone like Davey Grant,” Yanez said. “… Davey Grant can take a shot. He can take a hard shot. Man, if you go against someone who is a fighter like Chito. If you go against someone like Chito, and then he goes out there and just kind of plays with him and toys with him and knocks him out on the ground. I don’t know. There’s ups and downs with that, man. Then also, too, whenever he fought Kris Moutinho, he had the chance to fight a guy, who I think was ranked at the time, Ricky Simon. He had the chance to fight him but then doesn’t fight him. I don’t know. Something, I don’t know. But also, I’d be down to fight him. I don’t care. They’d have to pay me more. He’s always about the money. I am about the money, too, because I’ve got a family to feed.” (Transcribed by MMA Junkie)

Do you want to see Sean O’Malley vs. Adrian Yanez?