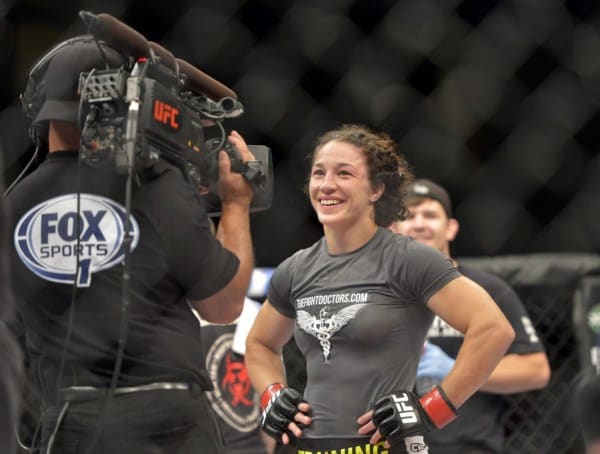 Heading into her match-up with No. 7-ranked Amanda Nunes at this Saturday’s (August 8, 2015) UFC Fight Night 73 from Nashville, Tennessee, No. 4-ranked Sara McMann may be looking ahead of “Leoa” to a far greater challenge.

Not surprisingly, the Olympic silver medalist wrestler has her eyes fixated on a rematch with dominant divisional champion ‘Rowdy’ Ronda Rousey, to whom she lost a vicious TKO stoppage in the main event of UFC 170 in February 2014. Even though Rousey floored McMann with a brutal knee to the midsection, it is still deemed an early stoppage according to McMann, who told FOX Sports she is looking for revenge on ‘Rowdy’:

“Any time I lose, I want revenge. I want to avenge the loss, I want to go back and show I’m better than the person. I feel that towards Miesha and Ronda, but obviously the one with Ronda that was an even more controversial stoppage so I would like that one to be first.”

Due to the fact that her fight with Rousey only lasted 66 seconds, McMann believes she wasn’t able to show her full skillset, and the same goes for the rest of the UFC women’s bantamweight division that Rousey has supposedly cleaned out:

“For me I know the fighter I am. Considering the fact that it was stopped after a minute and six seconds, that didn’t show the fighter that I am,” McMann said. “If they feel like (Ronda’s cleaned out the division), it’s justifiable. I don’t think Alexis Davis is the fighter that she showed or Cat Zingano, I think that they’re much better than that.”

But McMann wouldn’t say that Rousey’s dominant wins were necessarily flukes, however, choosing to at least give the champ credit for her devastating judo skills that are clearly light years ahead of her competition:

“I think especially when it comes to the armbars, that’s not a fluke, that’s earned. That’s something I can say she is heads and tails above other girls executing armbars and she proved that in judo. That was one of the moves she was excellent at in judo so if you reach an Olympic level where you have a medal in the Olympics then obviously it’s something that you’re very good at.”

And even though McMann only lasted a few seconds over a minute against ‘Rowdy,’ that total is actually 2 more than the 64 seconds that Rousey’s three latest opponents. Bethe Correia, Zingano, and Davis lasted combined. She believes that fight was stopped early, and described how her fans approach her with the same point of view. They also proclaim that they believe she’ll be the one to finally beat Rousey, something that she also believes will one day be true:

“Even to this day, people keep coming up to me and they’re like ‘that fight was stopped too soon’. I’m just sitting and eating lunch and people are like ‘you should be in there, you’re the one that’s going to beat Ronda’. I was like I think so, too.

“That is exactly how I feel. I think I’m the one that’s going to dethrone her.”

Although McMann may be one of the most talented women fighting in MMA, she does have recent losses to the division’s best in Rousey and No. 1 contender Miesha Tate, whom she lost a close majority decision to after rocking “Cupcake” with a huge right hand early on.

Still, if she can beat Nunes convincingly on Saturday night, she’ll undoubtedly put herself back near the top of an extremely short lists of legitimate title contenders in the shallow division. Do you believe McMann will earn another shot to prove herself against Rousey?