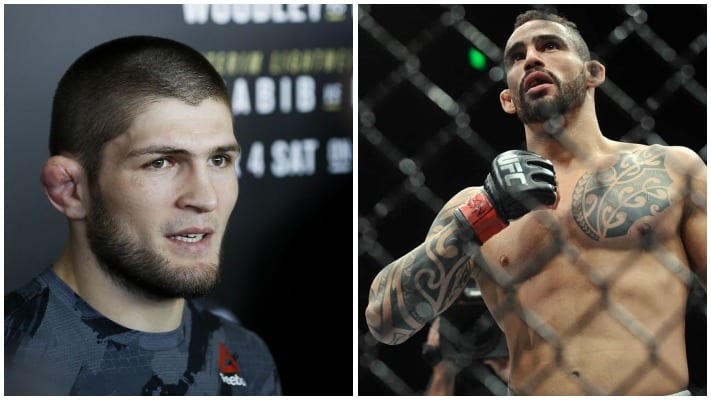 Welterweight contender Santiago Ponzinibbio is open to a move to lightweight if he gets a crack at current champion Khabib Nurmagomedov.

Ponzinibbio is on a seven-fight winning streak, having most recently knocked out Neil Magny last year. However, he is only No. 9 in the rankings and seems low in the pecking order for a title shot.

Looking to get into title contention, “Gente Boa” believes a win over Tyron Woodley would do just that, having called out the former champion multiple times already. But there are other opportunities that interest him as well, such as being the first person to defeat Nurmagomedov:

“Khabib, he’s 27-0, I can finish this guy, I know,” Ponzinibbio told media this past weekend when asked about his dream fights. “The first guy to beat this guy, is an exciting opportunity too.”

There’s always the possibility of Nurmagomedov clearing out the top contenders in his division and moving up to welterweight as well. That wouldn’t surprise Ponzinibbio for one:

But would he be able to make the move down to 155 if a fight with Nurmagomedov presented itself?

Ponzinibbio expects to be back in action by the end of this year.

What do you make of his comments? Do you think he can beat Nurmagomedov?