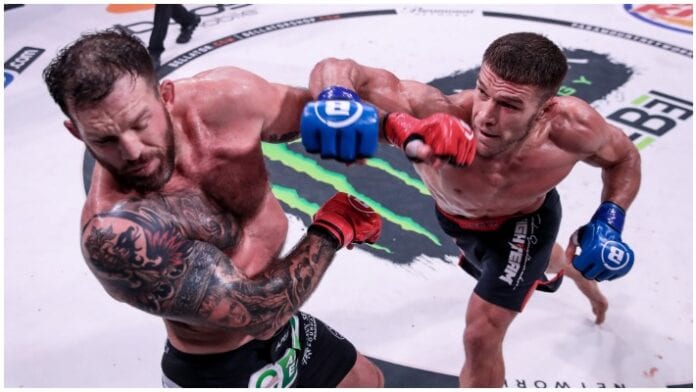 Ryan Bader has spoken for the first time since losing his light-heavyweight title against Vadim Nemkov at Bellator 244.

Bader was stopped by the Russian inside two rounds on Friday night. He has previously been in great form picking up Bellator belts at 205lbs and heavyweight. Bader last suffered defeat at the hands of Anthony Johnson during his time in the UFC all the way back in 2016.

Speaking on social media on Saturday night Bader reacted to the defeat and vowed to return stronger than ever, he wrote.

“Well, not the result we were after, but it’s the game we play. I’m all good and appreciate the support! I freaking hate to lose, but as always I’ll keep working my ass off. Lost one belt but still have that heavyweight belt on my shoulder and will be better than ever.”

Bader still has his heavyweight title and remains undefeated at the weight. The 37-year-old scored several high-profile wins over the likes of Muhammad Lawal, Matt Mitrione, and Fedor Emelianenko during the Bellator heavyweight grand prix which saw him capture the title in 2019. Bader has since defended the heavyweight strap against Cheick Kongo but the fight was ruled a no-contest after an accidental eye poke left Kongo unable to continue at Bellator 226.

It remains unclear if Bader will try to regain the light-heavyweight title he lost over the weekend. Nemkov believes his first defence will come against the winner of Phil Davis vs. Lyoto Machida II.

“The situation is a little unclear right now,” Nemkov said. “Machida is fighting Phil Davis, so I’d say probably the winner of that fight will be my first title defense. I know Corey Anderson just signed, but I feel like it’d be wrong for him to get a title shot coming over from the UFC. I feel like he should probably have a fight before that. At the end of the day, I’ll fight whoever they put in front of me.”

Do you think Ryan Bader will be able to bounce back from this loss?