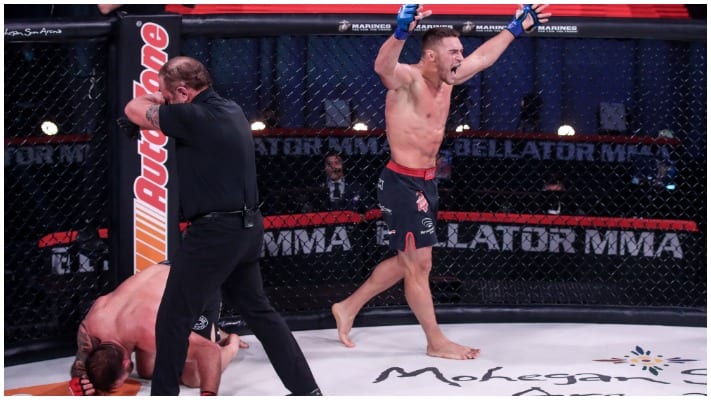 Bellator light-heavyweight champion Vadim Nemkov believes he is the best 205lb fighter in MMA after dethroning Ryan Bader at Bellator 244 on Friday night.

Nemkov landed a beautiful head kick and then swarmed Bader in round two of their main event match-up. ‘Darth’ was able to get back to his feet but was quickly knocked down again forcing referee Kerry Hatley to step in and wave off the fight.

Speaking to media post-fight Nemkov spoke with pride of becoming the first Russian to win a light-heavyweight title in a major organisation, he said.

“When I was training for this fight, I was actually mentally preparing for the historic value of the fight being the first Russian, not to just win, but to fight for a major 205-pound title. I feel like I made history – a small part of history.”

Now Jon Jones has moved up to heavyweight Nemkov believes he is the best 205lb fighter in MMA after taking out such a seasoned champion, he said.

“I feel like with all the changes going on in the 205-pound division and the calibre of opponent I just beat (the guy is a two-time champion in two different weight classes), I feel like I’m No. 1 right now,” Nemkov said. “To back up why I’m saying this, I didn’t just go through five rounds of a fight. I finished a top, top contender in decisive manner in two rounds. I feel like I’m No. 1.”

As for who’s next Nemkov believes he will face the winner of Lyoto Machida vs. Phil Davis II. He recognizes the credentials of new Bellator signing Corey Anderson but thinks the former UFC man should have to earn his shot.

“The situation is a little unclear right now,” Nemkov said. “Machida is fighting Phil Davis, so I’d say probably the winner of that fight will be my first title defense. I know Corey Anderson just signed, but I feel like it’d be wrong for him to get a title shot coming over from the UFC. I feel like he should probably have a fight before that. At the end of the day, I’ll fight whoever they put in front of me.” (Transcribed by MMAJunkie)

Do you think Vadim Nemkov is the best light-heavyweight fighter in MMA?