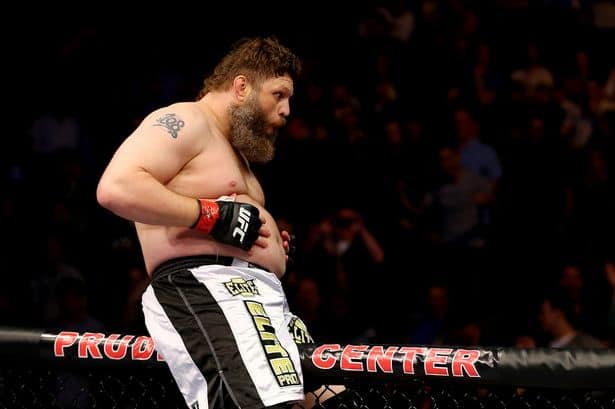 Two of the most colorful characters in the UFC heavyweight division collide this weekend (Saturday September 26, 2015) in Saitama City, Japan, as Roy Nelson takes on Josh Barnett at UFC Fight Night 75. What the main event pairing lacks in rivalry, it more than makes up for in depth of character and also the high possibility of a finish. Both ‘Big Country’ and ‘Warmaster’ are renowned for their larger than life personalities.

Nelson’s persona has often landed him in hot water with UFC president Dana White, but he tells The Deep Waters Podcast as transcribed by FOX Sports that it’s often very hard to go against the grain:

“The biggest one is just me going out and giving a 110 percent of what’s me, what’s my personal martial arts skills. Not nothing extra, no extra supplements or anything like that.”

Quite the rebel in his every day attitude, Nelson insists that MMA is all about testing the water in the best talent pool, but says being a family man is equally as important:

“Just, what can I do as a man, as a person. Just go out there against the best fighters in the world and see where I stand. That’s what I want. The other one is just being able to provide for my family, and try to be the best husband and father that I possibly can.”

“I always wanted to be a martial artist but what got me started in fighting was, I guess, fighters just pissing me off and I wanted to take their lunch money. That’s basically why I even started fighting.”

So there you have it, Roy Nelson is out to steal Josh Barnett’s lunch money in the Saitama Super Arena this Saturday, but how will this battle of giants play out? ‘Big Country’ has some very underrated grappling, but you could argue that going to the ground with ‘Warmaster’ is career suicide, meaning that one big punch might be Nelson’s only key to victory.

Stay tuned to LowKickMMA for more UFC and MMA news throughout the day!