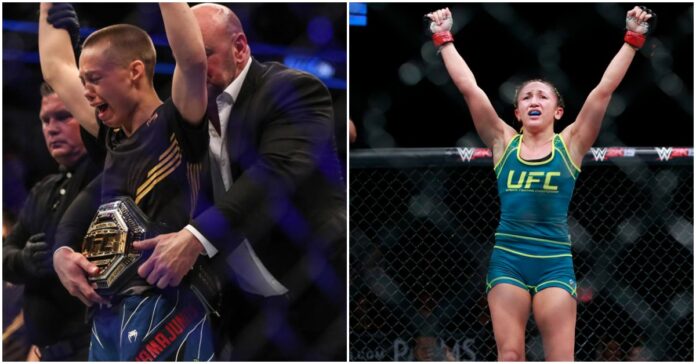 Strawweight champion Rose Namajunas has been set her next title defence at UFC 274 in May when she rematches against Carla Esparza.

The pair initially faced off against each other for the first time at The Ultimate Fighter 20 Finale in 2014 for the inaugural strawweight title. Esparza would get the better of the current champion in this meeting and submitted her via rear-naked choke in the third round.

Namajunas and Esparza are set to co-main event the UFC 274 card of May 7th at the Footprint Centre In Phoenix, after it was confirmed by Sports Illustrated.

From the pairs first meeting, Rose Namajunas has gone on to claim the strawweight tile on two separate occasions and made her first successful defence of it against Zhang Weili at UFC 268 beating the former champion via split decision.

Esparza has been on an impressive run of her own picking up five straight wins in a row. Esparza started this off with decision victories over Virna Jandriroba, Alexa Grasso and Michelle Waterson. Esparza would then beat two fellow top contenders first by getting past Marina Rodriguez back in July of 2020. She would follow that victory up with her most impressive win in this spell by stopping Xiaonan Yan in the second round at UFC FN: Font Vs. Garbrandt.

With the confirmation of this fight the UFC 274 card reads as followed:

Which fight are you looking forward to most at UFC 274?