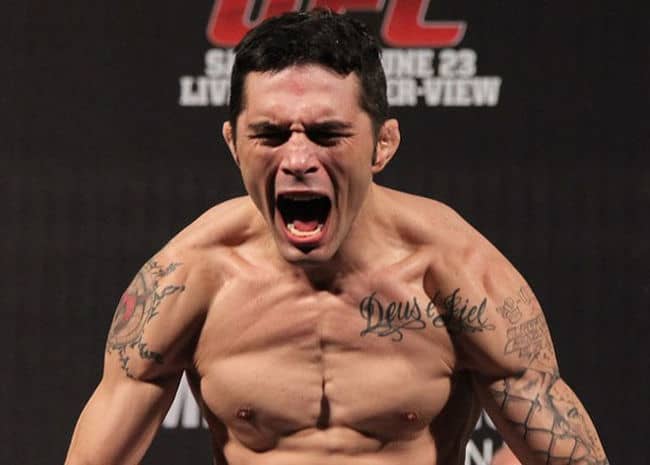 After he was suspended for nine months by the Brazilian MMA Athletic Commission (CABMMA) for testing positive for diuretic hydrochlorothiazide in conjunction with his submission win over Damon Jackson at May 30’s UFC Fight Night 67 from Goiania, Brazil, UFC featherweight Rony Jason denied using the banned substance.

He even went as far to state that he would sue CABMMA if his second, or ‘B’ sample came back negative, but news has come from MMA Fighting’s Guilherme Cruz that The Ultimate Fighter (TUF) Brazil veteran Jason did in fact fail for the same substance yet again. His B sample was sent to UCLA’s World Anti-Doping Agency (WADA) accredited Olympic Analytical Laboratory, where it was found that Jason had indeed tested positive for hydrochlorothiazide. CABMMA released a statement on the findings:

First, it is important to state that CABMMA is an independent entity dedicated to the development and regulation of MMA in Brazil. The UFC voluntarily submits itself to the rules and regulations adopted by the entity and so did Mr. Rony Mariano, through his affiliation prior to the event. It must be clarified that the entity follows the parameters set by the Nevada State Athletic Commission. Likewise, it must be stressed that the determination of the suspension is based on precedents involving such entity.

When the athlete ́s result of sample “A” was communicated by the to CABMMA, the athlete was immediately contacted by phone and documents sent to him by e-mail before the result was informed to the UFC and any official statement sent to the media. Therefore, the athlete was aware of his result and the possibility of testing his sample “B” was clearly informed to him at that occasion.

The appeal analyzed by the Executive Committee basically ensured that (i) the procedure for collection of the sample was done in accordance with the required standards, and (ii) Mr. Rony Mariano ́s sample “B” urine went through the correct process of testing with the presence of the athlete ́s legal representative.

The UCLA Olympic Analytical Laboratory (WADA Accredited Lab) analyzed sample “B”, as per request of the athlete, and the result once again was ADVERSE for diuretic hydrochlorothiazide.

Based on the above, the nine-month suspension is maintained, counting as from 30/05/2015.

Jason still wasn’t having it, however, instead switching to the stance that he hadn’t signed off on the test, thereby creating doubt (in his mind) that CABMMA would be able to prove it was indeed his sample. He clung to the theory that he was innocent even in the face of stark evidence to the contrary:

“My lawyer informed me (of the second result), but also told me there was nothing that proved it was mine because there was no signature in any of the samples. I will continue following this because I didn’t take anything.

“The whole procedure done here was incorrect, they can’t prove those samples are mine because there’s nothing on it that proves it. This happened exactly when I won a post-fight bonus.”

So it sounds like Jason believes that a sample from an unnamed person with diuretics in their system was put in place of his own, leading to his two test failures, suspension, and withdrawal of his $50,000 “Performance of the Night” bonus.

It sounds like a bit of an unlikely scenario. Should he just admit he made a mistake, accept his suspension, and move on?