LowKickMMA.com
Home UFC News Report: Holm vs. Rousey 2 Still On For This Year 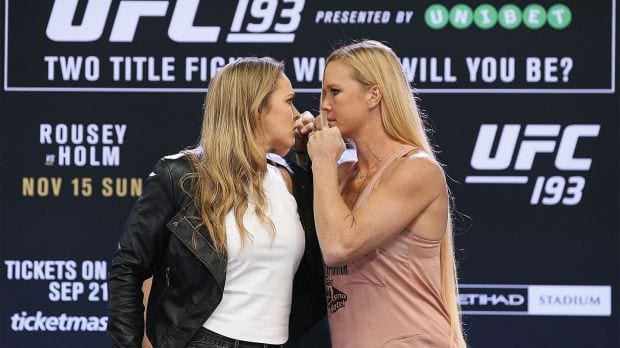 There’s a question that almost MMA fans wants to know, and that question is when former UFC women’s bantamweight champion Ronda Rousey will be fighting again.

Rousey lost to Holly Holm in devastating fashion at UFC 193, and the two were rumored to square off again at UFC 200 in a rematch. That isn’t happening anymore, however, because Holm will be fighting Miesha Tate in the co-main event of UFC 197 in her first women’s bantamweight title defense.

TMZ Sports recently caught up with Rousey and asked her when she will be returning to action. According to Rousey, who was in Boston on Sunday to watch her boyfriend and fellow UFC fighter Travis Browne fight Matt Mitrione at UFC Fight Night 81, she will fight later this year and hopes to fight Holm in a rematch. However, Rousey still does not know when that fight will exactly take place.

“Some time later in the year,” Rousey said. “They haven’t told me an exact date or location or anything yet. It’s a decision we’re all gonna make together, but I’m kind of waiting to hear from them what options they’re gonna give me. I haven’t gotten my options yet. [Holly Holm rematch] is what I want to do.”

Check out the video here:

Rousey’s schedule is crazy right now due to numerous movies she’s filming this year. Her return is also delayed due to the injuries that she sustained versus Holm at UFC 193.

The UFC’s plans obviously could be altered if Tate beats Holm at UFC 197.