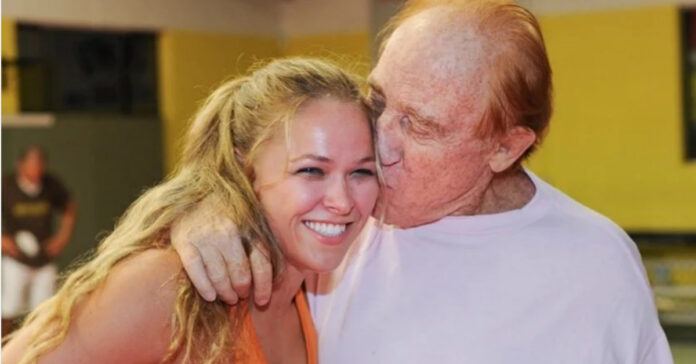 Reactions from Ronda Rousey and the rest of the mixed martial arts community kept pouring in after the passing of ‘Judo’ Gene LeBell.

LeBell is widely regarded as the person who infused judo into the sport. He’s most well-known for mentoring the former UFC champion Rousey throughout her career. But he has more accolades on his resume that go beyond normal expectations.

Early Wednesday, his close family friends reported the news of his death on social media.

LeBell spent a considerable amount of time exploring his interest in acting and professional wrestling. He has trained with some of the most iconic athletes in combat sports history, including Bruce Lee, Muhammad Ali, and Sugar Ray Robinson.

He is popular for his work as a coach. In his early days, LeBell also had a glittering record as a high-level amateur judoka in the 1950s. He even had a professional MMA bout, where he defeated boxer Milo Savage in a hybrid ruleset back in Dec. 1963. That fight could arguably be the first legitimate MMA competition.

LeBell also served as an MMA judge until 2018. Having touched so many peoples’ lives, his loss was mourned by many in the fight world.

You can check out the reactions from Ronda Rousey and the MMA community below.

Ronda Rousey posted a photo on her Instagram, writing: “Legend.”

Shayna Baszler tweeted: “I won every R-E-A-L fight I ever had & was penniless. I LOST every R-E-E-L fight I ever had and made millions” — Judo Gene trying to convince me to quit fighting and go into Hollywood stunt work. I’m still calling it a double wrist lock, just so you know.”

Big John McCarthy took to Twitter: “With the heaviest of hearts I say goodbye to one of my favorite men in the world. Judo Gene Lebell passed in his sleep, a warrior in every way to the very end. In 1963 Gene took on Milo Savage in a mixed fight. Gene choked him like he did me & everyone else. RIP Gene, I love ya.”

Cris Cyborg wrote: “Judo Gene Lebell impacted so many lives through his kind, caring, and loving soul. It is through those memories his legacy will become legendary and forever remembered. RIP and prayers to all who loved him.”