Roger Gracie is known worldwide as one of the finest grapplers to ever hit the mat, as he’s taken home many a gold medal at both ADCC and The World Jiu-Jitsu Championships. He has translated his high-level grappling prowess into a successful MMA career, where he sits with a 6-1 record. All of his wins have come by way of submission save for a decision win over Keith Jardine.

This summer, Gracie is set to take on the world’s best competition in the UFC. He’ll face fellow Strikeforce import Tim Kennedy at July’s UFC 162. But the main event of that card is obviously the fight that everyone has been talking about, as most believe that upstart number one contender Chris Weidman is truly the man to finally dethrone the Great Anderson Silva. The MMA community is abuzz about Weidman’s lethal mix of wrestling and top-shelf submission skills, and Gracie is no different. He recently met up with ESPN to discuss Weidman’s chances at the blockbuster summer event:

“I think [Weidman] is very, very dangerous. His grappling is at a very high level. He can submit any world-class grappler. I think he’s really that good. He can tap anyone, even me. It’s just a matter of if he can put Anderson in those situations. I would still put my money on Anderson but I think Chris Weidman is dangerous and can surprise him.”

High praise from a man who definitely knows what he’s talking about. Indeed, Weidman won The East Coast Grappler’s Quest Absolute Division after only training for three month’s at Matt Serra’s BJJ academy. That’s an insane learning curve, and one that makes Weidman unlike any other fighter that Silva has faced.

That phrase has become quite cliché however, as Silva has mightily dispatched each and every opponent that was supposed to present him with a new set of problems. Weidman may have more confidence than those other fighters, and if there’s any truth to Roger Gracie’s words, he may have more to offer in the way of technical grappling as well. 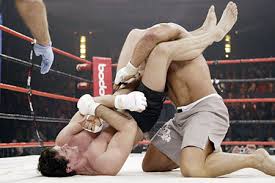