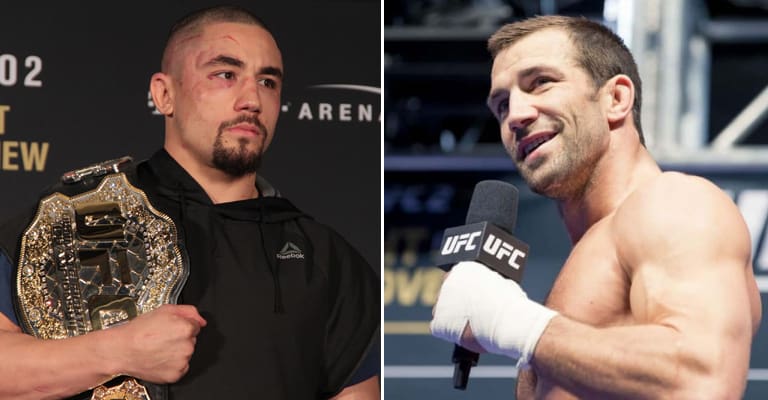 Earlier tonight (Dec. 7, 2017), the UFC confirmed that Georges St. Pierre had officially vacated the middleweight title he won just over a month ago via third-round submission over Michael Bisping at UFC 217 on Nov. 4 in New York City.

The promotion also confirmed that Robert Whittaker has been elevated from interim champion to undisputed champion and that he’ll defend that title against ex-champion Luke Rockhold at UFC 221 on Feb. 11 in his home country of Australia:

The undisputed UFC middleweight championship will be on the line in Australia on Feb. 10 (Feb. 11 local time), when Robert Whittaker defends his crown for the first time against former titleholder Luke Rockhold in the main event of UFC 221.

With this announcement, interim champion Whitaker has been elevated to undisputed champion, and subject to approval from the Combat Sports Commission in Western Australia, the five-round bout will be the first event in Western Australia and held at Perth Arena.

Whittaker is currently riding an incredible eight-fight winning streak that includes four knockouts. He’s beaten top contenders Derek Brunson and Ronaldo Souza, and most recently defeated Yoel Romero at UFC 213 this past July in a five-round fight that made him the interim champion.

Rockhold, on the other hand, surrendered his title in shocking fashion to Bisping at UFC 199 in June 2016. Due to injuries, he then took some time off, but he returned this past September to stop former World Series of Fighting (WSOF) two-division champion David Branch.

Who are you taking in this fight?