On Saturday, July 8, Robert “The Reaper” Whittaker put on a brilliant performance in the main event of UFC 213, winning the interim middleweight title against longtime contender Yoel Romero by unanimous decision.

Whittaker and Romero closed out the depleted International Fight Week-ending card with an instant classic, and to hardcore fans, that more than made up for the scrapped main event between Amanda Nunes and Valentina Shevchenko.

With the victory, “The Reaper” won himself a guaranteed shot at middleweight champion Michael Bisping and shook up the division to its core. And let’s be honest, because after all, the UFC 185-pound landscape, although deeply talented with top contenders, has been in shambles ever since “The Count” shocked the mixed martial arts (MMA) world when he knocked out Luke Rockhold at UFC 199 in June of last year.

The weight class that had been dominated for so long by Anderson “The Spider” Silva had a very clear structure for many years, one that went like this: become a contender, fight Silva, lose, get back in line.

Then one bad decision by Silva to clown the entire fight and one perfectly-timed left hook by Chris Weidman changed everything, and made Weidman the undisputed champion. It looked like Weidman, an All-American wrestler and crisp striker, would stay on top for a while; after all, he beat one of the all-time greats twice.

But his reign ended when he threw an ill-advised wheel kick at Rockhold and got his face smashed in. And we know how Rockhold lost the belt, which brings us back to Bisping. 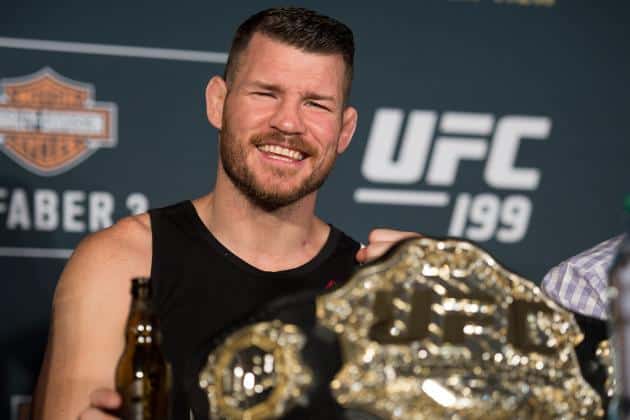 Bisping is not a popular champion. He has never faced the top three contenders in the division and was the benefactor of good timing in his title shot against Rockhold after Weidman was forced to withdraw from their scheduled rematch with a neck injury.

His on-camera personality is brash and rude, even taunting Rockhold after knocking him out. His antics, like throwing the middleweight belt at Whittaker’s feet on Saturday night, reminds some UFC fans too much of pro-wrestling.

While some fans may argue that his personality comes from the desire to sell more pay-per-views (PPV), the main issue with Bisping so far has been his dodging of top contenders. His only title defense came against an aging Dan Henderson, who was ranked number 14 in the division at that time, in a very close fight at UFC 204 last October that almost saw Bisping knocked out twice.

Since then, the only other fight Bisping was going to take was against Georges St. Pierre, the welterweight legend somehow fighting for the middleweight title and pole-vaulting every contender waiting for their title shot. The fight with St. Pierre fell through, Bisping injured his knee, and the middleweight division was at a standstill.

Then, through the underbrush came “The Reaper.”

For a while, Whittaker had been a sleeper in the middleweight division who showed a lot of promise but wasn’t quite yet championship caliber. He had a fun fight with Derek Brunson last year, but hadn’t really broken through the top five contenders.

However, on April 15, the 26-year-old Australian destroyed Ronaldo “Jacare” Souza, a perennial contender and one of the best in the division, with savage striking that left “Jacare” splayed on the canvas by the second round.

The knockout propelled “Bobby Knuckles” to number three in the division and set up a clash with Romero, one of the scariest fighters on the UFC roster. Fast-forward three months later, and Romero has his first loss in the UFC and Whittaker is the new interim champ.

As of today, he’s guaranteed a crack at ‘The Count’ in order to unify the two middleweight belts. If Whittaker looks any bit as good as he did against Romero, Bisping could be in deep trouble.

If the UFC overlooks Whittaker and schedules Bisping for some other opponent such as St-Pierre, the backlash would be swift and fierce, but that is (hopefully) unlikely. If Whittaker beats Bisping and becomes the champion, the middleweight division could finally be untangled, as “Bobby Knuckles” has shown no hesitation when accepting fights. With no lack of contenders in the division,  middleweight could turn into the division to watch, and Whittaker could be one of the best champions to watch.

The match ups for “The Reaper” are mouth-watering, but it all depends on the UFC, and – here’s the hard part – on Bisping, who may stand in the way of an exciting new prospect in the promotion. But if he owns up to his allegiance to defending the belt, “The Reaper” could come calling for the polarizing champ from across the Pond.