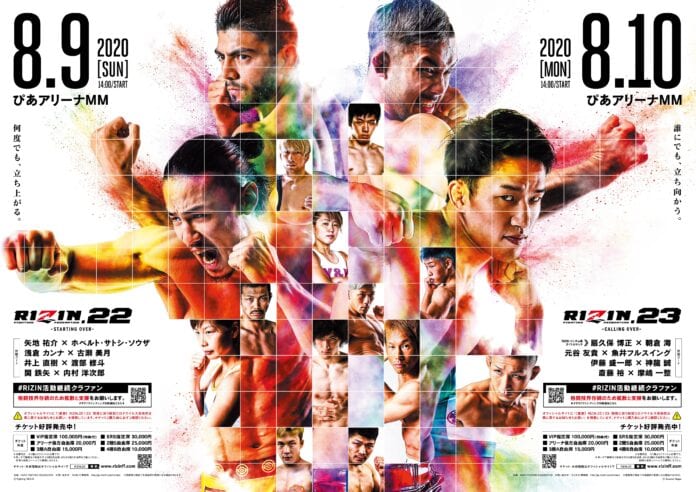 RIZIN FF held a press conference over the weekend in which it announced further fights for its upcoming events RIZIN 22 and 23, as well as a big-name signing for its kickboxing stable.

After a five-month enforced break due to Covid-19, the Japanese promotion returns next month with back-to-back shows scheduled on August 9 and 10. RIZIN 22: Starting over will be headlined by a bantamweight clash between former UFC fighter Naoki Inoue and RIZIN newcomer Shooto Watanabe. The company announced a further three bouts for the card at this weekend’s press conference.

They were a bantamweight clash between Erson Yamamoto and Kenji Kato; a featherweight bout between Rikuto Shirakawa and Kyohei Hagiwara and a catchweight kickboxing contest between Nadaka Yoshinari and Yushin

The name that will get the most attention from this new batch is Japanese stand-up sensation Nadaka Yoshinari. The 19-year-old has won Muay Thai titles at the world-renowned Lumpinee and Rajadamnern Stadiums in Thailand and will be making his promotional debut against compatriot Yushin.

A bantamweight clash will also headline RIZIN 23:Starting Over when Kai Asakura takes on Hiromasa Ougikubo. Five fights were added to the lineup over the weekend, one of which will see Japanese MMA legend Kotetsu Boku make his first appearance under the RIZIN banner. The 43-year-old is in the sunset days of his career and arrives at RIZIN after spending the last eight years fighting for ONE Championship. Boku makes his entrance riding a three-fight losing streak and will be hoping a change of scenery brings a change in fortune when he meets former Shooto veteran Jin Aoi.

The other bouts announced were three kickboxing bouts;Shintaro Matsukura vs. Koji Mori and Kaito vs. Daryl Lokoku, and Kento Haraguchi vs. Taiga as well as flyweight contest between Yusaku Nakamura and Tatsuki Saomoto.

After the additional fights were released RIZIN’s president Nobuyuki Sakakibara revelaed to the assembled media that the company had signed K-1 kickboxer Koji Tanaka. The 31-year-old Oska-native is one of the world’s top flyweights and his signing is a huge coup for RIZIN and could see a mega-bout between Koji and Tenshin Nasukawa take place in the future.

Here are the updated lineups for RIZIN 22 and 23