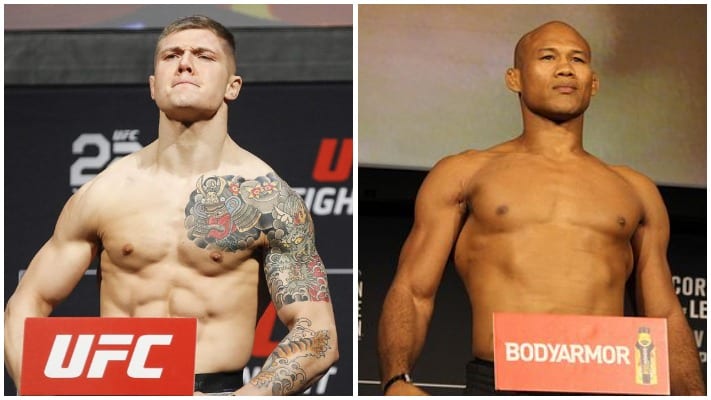 An exciting middleweight match-up between surging contender Marvin Vettori and former Strikeforce champion Ronaldo ‘Jacare’ Souza has been added to UFC 256 on December 12 according to reports.

Vettori was rumoured to be facing off against Omari Ahkmedov on the card but that fight was never officially confirmed by the UFC. According to Emanuele Lochner – Vettor’s personal trainer – Ahkmedov is out and has been replaced by long-time contender ‘Jacare’. Lochner announced the news on announced on his The Scramble MMA SHOW.

MMA manager Ali Abdelaziz seemed to confirmed the match-up on social media yesterday. Abdelaziz posted the below photoshopped image showing Vettori alongside an alligator, the vicious predator Souza takes his nickname from.

Vettori is on a three-fight winning streak after victories over Cezar Ferreira, Andrew Sanchez and Karl Roberson. The Italian prospect is currently ranked #14 at middleweight. He has been vocally pursuing the biggest and best fighters at 185lbs and has now apparently landed a fight against one of the best to ever do it at the weight.

‘Jacare’ was supposed to face off against Uriah Hall at UFC 249 earlier this year. Unfortunately, the Brazilian tested positive for the coronavirus and that fight was scrapped. Souza is on riding a two-fight losing streak the first of his professional career. The 40-year-old having dropped a decision to Jack Hermansson before stepping up to light-heavyweight and being edged out by the Jan Blachowicz who has since become 205lb champion. ‘Jacare’ will be looking to return to the win column and enter middleweight title contention again by beating Vettori in December.