It looks like the bad news just keeps flowing for the ex-UFC light-heavyweight champion Jon Jones. After fleeing the scene of a hit-and-run this past Sunday in the early hours of the morning, Jones was at large for about a day before handing himself in to Albuquerque police, facing felony charges.

The UFC brass soon got wind of the situation and promptly stripped “Bones” of his belt and sidelined him. Daniel Cormier and Anthony Johnson now fight for the belt at UFC 187, and JJ continues to grow in to a much more contrasting character than any of us ever imagined possible.

So not only is Jones facing jail time, potential unemployment and loss of image, but now we learn that the Jon Jones Reebok deal is history. The sports giant sacked “Bones” off this afternoon, as reported by Darren Rovell:

The young former champion was also dropped by Nike as a sponsor during the UFC 182 drug test failure debacle. This situation really is getting messier by the hour. That being said, this was somewhat expected from the start.

In a week dominated by negative press for MMA and the UFC, will the sport or promotion be irreversibly damaged? It’s sad to think that a fan who started watching MMA this year will likely have seen only it’s ugly side in the media since 2015 began. Thoughts? 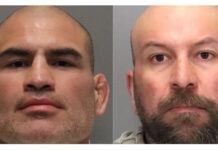