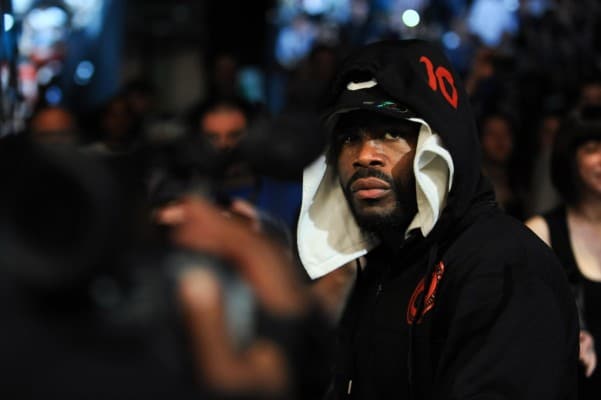 A former light heavyweight champion is finally set to return to the octagon following nearly two years off healing from a serious knee injury.

Rashad Evans and No. 3-ranked Ryan Bader recently expressed their mutual desire to face one another at this October’s UFC 192. In a second piece of news centering on the Houston, Texas-based card from this evening’s UFC Tonight, UFC President Dana White revealed that the bout had finally been made official to co-host Daniel Cormier:

Cormier previously had an unfair confrontation with Bader after his title sealing win at UFC 187 where ‘DC’ blasted ‘Darth’ from afar with the added benefit of a microphone at his press conference, something he later admitted was unfair. But that doesn’t mean that Cormier will let up on his relentless feud with Bader. He continued the war of words with a callout of his nemesis:

“Ryan Bader, go out and earn your title shot bud. Let’s see what you can do now. Beat Rashad Evans, then you can beat up by me.”

Bader has unceremoniously won four straight decisions, wins that many have called uninspired and boring. His biggest win was a split decision win over former top contender Phil Davis at January’s UFC on FOX 14. It’ll be more than interesting to see how effective the aging great Evans is in his return to the octagon, but if the highly ranked ‘Darth’ can get past ‘Suga,’ it will tough to deny him his desired title shot in the talent-starved light heavyweight landscape.