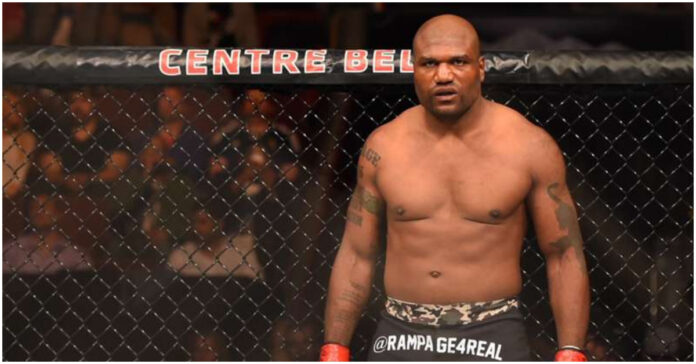 The topic of fighter compensation has been at the forefront of discussion in the industry for the last few months and a UFC legend in Rampage Jackson has given his two cents on the issue.

A large part of this conversation becoming such a hot button subject has been the ongoing war of words between Jake Paul and UFC President Dana White but lately, more and more fighters from past and present have sounded off including former light heavyweight champion Quinton Rampage Jackson.

During an interview with South China Morning Post, Jackson said that while he never received an extremely lucrative payday, he acknowledged that the fans operate on a belief that all fighters are broke and that’s just not the case.

“I’m not gonna lie, I get kind of defensive when they talk about pay because the stigma of MMA fighters throughout the years of my career of fighting is that we fight for chump change and that’s why we not as respected in the sports world and stuff like that cause people think we broke.”

Jackson added that while he had “never done Mayweather numbers or the 30 million dollar paydays,” a lot of MMA fighters are paid quite handsomely. He said a big reason for this common misconception was that unlike boxing, the only payment information released to the public was only what the fighters are paid by the athletic commission. This means that some prize money, brand sponsorship money and all other endorsements or ventures a fighter may be involved with are usually not disclosed.

“So I’m kind of torn. It’s kind of embarrassing that people don’t think we don’t make that much money.”

Another notion Rampage wanted to clear up was that not all boxers make more than all MMA fighters, it’s only the top one percent that get paid so lavishly in boxing. He added that you can’t allow the likes of what Mayweather, Fury and Wilder bring in to represent all of boxing because the guys lower on the card make less than most MMA fighters do.

You can catch the full interview below:

Do you agree with Rampage’s opinions on the pay discrepancy between boxing and MMA?