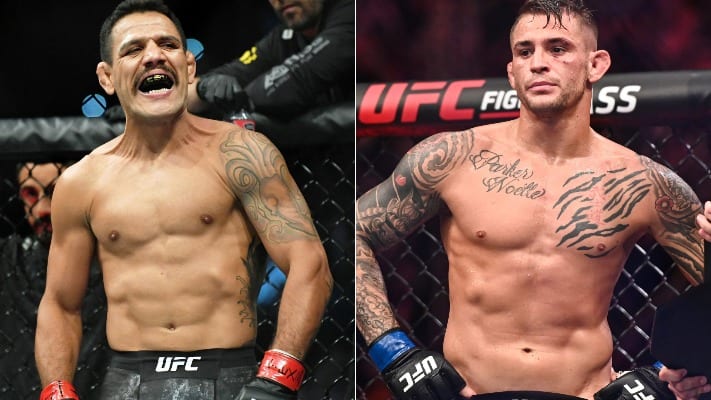 Dustin Poirier is currently on a quest for gold at 155 pounds, but “The Diamond” has admitted he’d jump to 170 pounds for the right fight that gets him excited. Perhaps a matchup with former 155-pound king Rafael dos Anjos could be that very matchup Poirier is searching for.

Recently, a fan on Twitter asked “RDA” if he’d be willing to fight Poirier at 170 pounds. Dos Anjos replied saying he’s down to meet the American Top Team (ATT) product inside the Octagon at welterweight.

Of course, Poirier has some pretty high standards for his next opponent. Dos Anjos has lost three of his last four bouts, most recently dropping a decision to Leon Edwards at UFC San Antonio. He has also suffered defeats to Kamaru Usman and Colby Covington within the last year. Now, “RDA” is looking to regroup and get back into the title hunt he was in the mix for not too long ago.

Poirier, on the other hand, has seen a tremendous amount of success inside the cage as of late. Despite his last appearance being a submission loss to Khabib Nurmagomedov in Abu Dhabi for the lightweight title, Poirier was on a five-fight win streak before that against some of the best names at lightweight.

What do you think about “RDA” taking on Poirier at welterweight?