LowKickMMA.com
Home UFC News Hendo: Vitor Belfort Felt Like He Was Off The Juice, Then He... 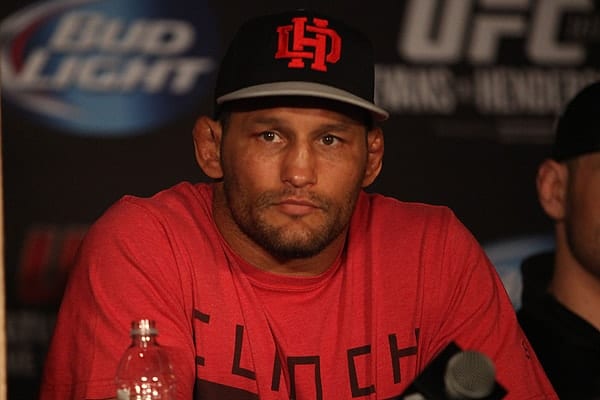 Former two-weight Pride FC champion, Strikeforce light-heavyweight champion and UFC legend Dan Henderson is once again gearing up for a big fight. At UFC Fight Night 77, the 45-year old faces Vitor Belfort in a trilogy maker dating back to the glory days of Japanese MMA. Having beaten ‘The Phenom’ by decision at Pride 32, then lost by kncokout against the Brazilian striker in 2013, ‘Dangerous Dan’ needs a win in this rubber match for many reasons.

At this twilight stage in his storied career, the Olympic Greco Roman wrestler will look to gain his first consecutive wins in five years. A storming first round finish of Tim Boetsch in June this year showcased a glimpse of Hendo’s prime days, and he tells AXS TV Fights that there’s still more power left in the tank. Check out the quotes:

“I don’t pay much attention to how many fights I’ve had, I just look at one fight at a time. I look at my opponent at that time, and it’s a guy I’m one and one with, Vitor Belfort. (At Pride 32) I remember being in the clinch for the first time with him, and he kinda just didn’t feel very strong. I thought maybe he was off the juice because it was the first show in the USA, but it turns out he tested positive anyway. In the first fight I just paused at a bad spot and he caught me with a nice punch. My mistake I made, it won’t happen again. I know that I hit hard too, and I’m going to make sure he knows that.”

Although he says there’s a good fight left in him, Henderson acknowledges that the next couple of bouts will be deciding his immediate retirement plans. That said, he’s also open to fighting at light-heavy, or even heavyweight:

“I have no problem fighting at lhw, hw, I know these bigger guys, depending on their style, can give me trouble. When they get on top of me it can make it a little more unpleasant. If I had lost to Boetsch I think I would have hung them up after that. I have two more fights on my contract, maybe that’ll be it or maybe I’ll fight a couple more times. It’s up to Zuffa what they want me to do.”

On to the UFC-Reebok deal, and Henderson adds himself to the growing list of fighters that aren’t exactly over the moon with the partnership:

“It’s nice to have a big company come in and want to sponsor the fighters, but when they are making decisions and not letting the fighters have a say, I don’t think that’s a positive thing. It’s a pay cut, unfortunately that’s what we’re dealing with and that’s the way it is.”

So what’s next if he can get past Belfort in November? A rematch with Anderson Silva or the elusive bout with Jon Jones says Henderson:

“Some fans want me to fight Anderson Silva, I know he is not champ right now, but that’s a fight a lot of people want to see happen again. Maybe Jon Jones, but who knows what he’s going to be doing. He’s a tough fighter, I was more ready for that fight than any other fight. He’s a great fighter.”

Finally, the MMA legend addresses the ban handed down to ‘The Spider’ for his UFC 183 failed drug test for steroids. ‘Hendo’ believes that it was good for the sport to have the legend outed, but not so great for the Brazilian’s legacy.

“I think it’s great, not great for Anderson Silva but great for the sport. Hopefully it will start deterring guys from doing performance enhancing drugs. It’s unfortunate it tarnished his legacy, but there’s always this question mark over how long he has been doing it.”