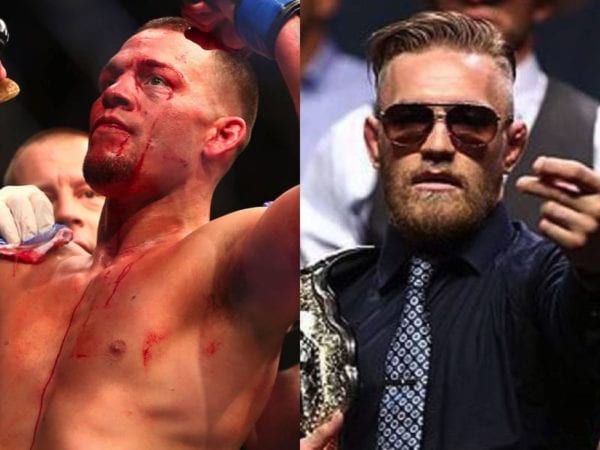 It’s been almost two years since fans have seen Nate Diaz compete in the octagon when he lost a razor-thin majority decision to archrival Conor McGregor at August 2016’s UFC 202.

The younger Diaz brother has stayed on the sidelines since, holding out for the monstrous trilogy fight with McGregor that has been looked at as a foregone conclusion ever since ‘The Notorious’ tied the score at one apiece following Diaz’ shocking submission victory in their short-notice first match-up at UFC 196.

He’s remained active on social media in the time since as well, calling out many of the top lightweights on social media to elicit criticism from said fighters that he’s been turning down high-profile bouts at an incredible clip. He’s reportedly been offered opponents like Eddie Alvarez, Tony Ferguson, and even welterweight champion Tyron Woodley, only to turn them down and stay on the bench.

So even though Diaz claims he wants to be active, it seems he’ll only consider a return fight against McGregor, and for a longtime veteran clearly only motivated by the biggest and best payday right now, you can hardly blame him based on that point of view.

However, that’s not succinctly the case according to Diaz’ longtime friend and teammate Jake Shields, who revealed during this week’s edition of The MMA Hour (via MMA Mania) that Diaz is not only looking for McGregor but simply the biggest and most lucrative fight possible:

“He’s not just looking for Conor. He’s looking for a fight that makes sense and that’s going to give him a big payday and a lot of hype.”

There’s little evidence to doubt that any fight involving Diaz’ return would be big business no matter whom he fought, yet the obvious blockbuster is the third fight with McGregor that seemed like it was a stark eventuality but now may be in doubt considering the Irish former champion is awaiting court and perceived to be facing current 155-pound champion Khabib Nurmagomedov if and when he does return.

That would leave precious few opponents who truly move the needle for Diaz, and that count could be even fewer when names he would actually fight are taken into account.

It’s laughable to consider him a welterweight title contender, especially with Rafael dos Anjos facing Colby Covington for the interim welterweight title at UFC 225 and Woodley expected to return from surgery to fight the winner. That makes Woodley vs. Diaz unlikely, although there may not be another bout Diaz is willing to return for.

Shields may claim Diaz isn’t just looking for his last McGregor payday, but who else may he be looking for?