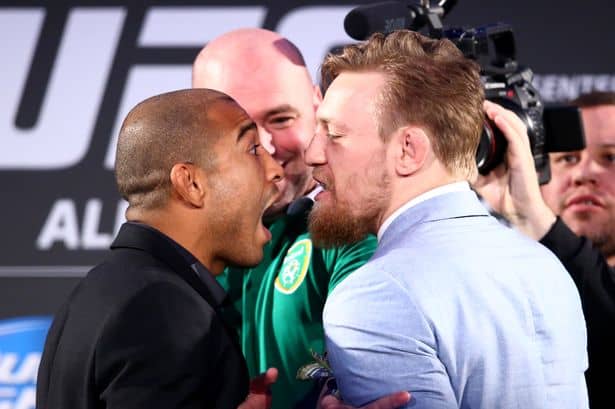 UFC featherweight champion Jose Aldo will finally square off with his bitter rival Conor McGregor at UFC 194, after many months of hype and media confrontations. ‘Scarface’ watched from the sidelines with an injured rib as McGregor captured the interim title at UFC 189 with a rousing TKO win over Chad Mendes, and fulfilled what seemed to be the UFC’s belief in the young Irish Star.

For his part, ‘Money’ addressed the questions regarding McGregor’s wrestling, or apparent lack of, in the form of numerous takedowns and top control. In the end it was McGregor’s night, but the Team Alpha Male fighter doesn’t believe it will happen for ‘Notorious’ at UFC 194. The three-time UFC title challenger sat down with Stud Radio Show this week to discuss the UFC 194 main event and MMAMania got the quotes:

“I think Aldo. Feeling the kicks of both guys obviously Aldo’s power and speed is 10 times more than Conor. I think Conor does a great job of keeping that distance with his punches which could possibly give Aldo some issues but I mean… Here’s the thing, Aldo gets tired but finds a way to push through it.”

We’ve seen Aldo get in trouble with previous opponents when the gas tank started to fade, the five round war with Mark Hominick certainly springs to mind. Mendes feels where he failed on the feet, ‘Scarface’ will get the win:

“I mean, on the inside he punches hard as hell. Like, the times that I’d get inside of Conor I was beating him on punches and landing and stuff. And Aldo I feel is just as fast on the inside as me and has power. Conor can take a punch though so I’m not seeing really either one of these guys going out. But I just see Aldo winning that fight. I think he’s got too much power, too much speed, too much athleticism. I think Aldo could go out there and take him down and just beat him on top every round. I mean I felt Aldo on top of me, he has great control. He definitely knows what he’s doing on top and Conor off his back doesn’t really have anything.”

It’s a huge fight for the two champions come December 12., but perhaps even more meaningful is the impact on the UFC. The promotion has spent a lot of money on pushing Conor McGregor as the next big marquee star, and in doing so have pushed the already anti-Zuffa Jose Aldo in to a near-state of alienation.

Has Chad Mendes hit the nail on the head with his prediction, or will ‘The Notorious’ upset the odds once again and capture the Brazilian’s title?