LowKickMMA.com
Home MMA News Poll: Should Weidman vs. Rockhold Have Been A Main Event? 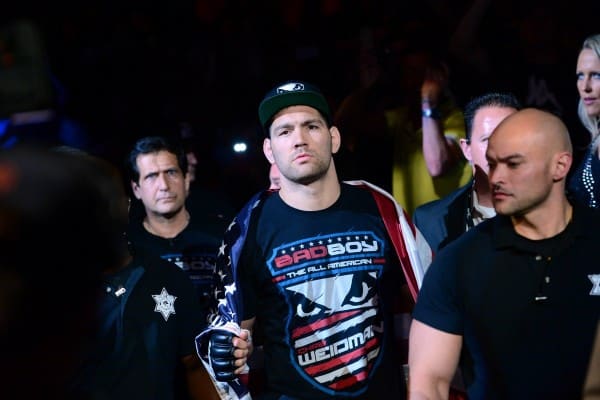 It was a no-brainer booking for the stacked division, as undefeated champion Weidman recently put his lengthy feud with Vitor Belfort to bed with a first round TKO at UFC 187, while Rockhold extended his impressive streak of stoppage wins to four with a dominant second round submission of Lyoto Machida in the main event of UFC on FOX 15.

But it also came as a bit interesting that the fight was booked for the co-main event of the card, which will be (hopefully) headlined by a massive Jose Aldo vs. Conor McGregor featherweight title main event. Obviously the grudge-fueled featherweight title unification bout is a bigger fight; it’s arguably one of the biggest in UFC history despite a bit of luster being lost when Aldo pulled of their first scheduled matchup at UFC 189 in July.

Regardless, Weidman is the UFC’s only undefeated male champion, and he’s also the man that put to rest the reign of all-time great champion Anderson Silva. This is his second co-main event, however, and at some point you might begin to wonder when the 185-pound boss will be saved to headline his own card.

Part of it may be history of injuries; the champ has pulled out of three title fights recently that left the UFC scrambling to put together marketable cards. He did headline UFC 175 opposite Machida and do decently well, but he was backed up by Ronda Rousey’s devastating 16-second win over Alexis Davis.

Overall it just seems like Weidman still has some convincing to do in order to win over the fans. In a post-fight interview at UFC 187, he urged them to “join his team” while they still could. Do you side with the champ enough to believe that his blockbuster showdown with Rockhold should headline its own card?