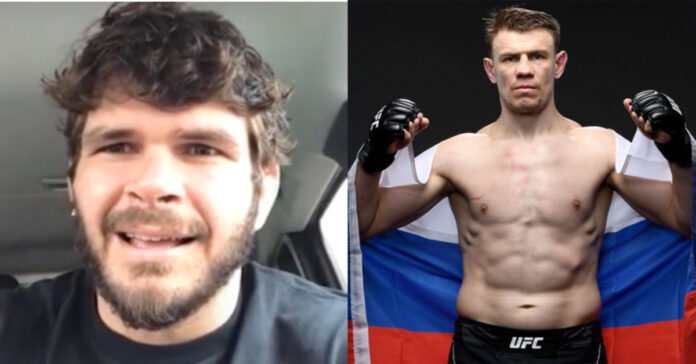 Lins is recently coming off his UFC Light Heavyweight debut, where he was able to beat Marcin Prachnio (15-5 MMA) over 15 minutes earning himself his first UFC victory in three attempts.

Although ‘Monstro’ came into the promotion as the former PFL Heavyweight Champion with four finishes in four showings, during a recent interview with LowKickMMA’s Mike Owens, Philipe Lins explains how he is less untroubled now competing at 205lbs.

“I come to the UFC with a lot of hype. Then In my first two fights, I feel a lot of pressure, and after then my third fight I win,” Lins stated.

“I take off from my shoulders a lot of weight and I’m feeling free right now and I come back to my original division at Light Heavyweight. I’m feeling great at this division I feel in the right division right now.”

Philipe Lins breaks down his fight with Maxim Grishin

Ahead of what will be his second bout of the year, Lins detailed what he makes of his next opponent, Maxim Grishin, in addition to how he sees the matchup playing out.

Despite the 37-year-old being understanding and respectful of what threat his opponent has to offer, Lins will be looking to make himself at home in the Light Heavyweight division as he discusses his plan to “… ride through this matchup.”

“But they’re not putting too much attention on my opponent, of course, I’m watching his fights, but I’m focused on what I need to do, I make a very good plan very good strategy with my coach to fight against him to do what I need to do to own that fight.”

Will Philipe Lins get another win at 205lbs against Maxim Grishin?