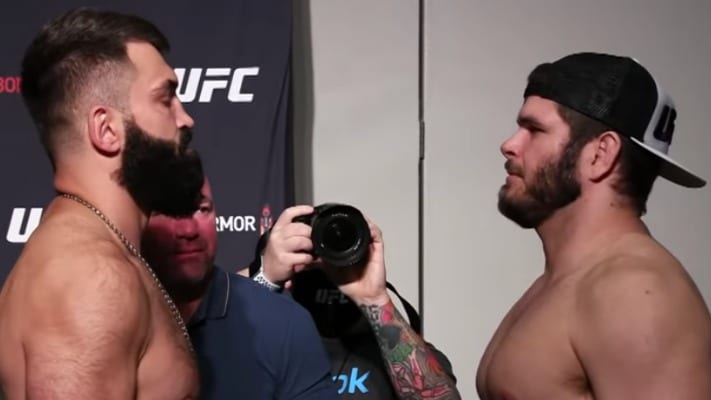 Next up on the UFC Jacksonville main card is a heavyweight affair between Andrei Arlovski and Philipe Lins.

Round 1: The pair exchange strikes but nothing significant early on. A lot of feinting and feeling each other out in the first minute. Lins lands a leg kick. Arlovski switches stances and goes for a double jab. Lins responds by advancing forward and landing strikes. The two clinch up but separate as Lins throws a number of quick strikes. The two land huge strikes on each other soon after but neither are hurt. Lins lands a body kick. Lins lands a big right as Arlovski was coming in. The two are starting to exchange a lot more strikes. Lins blocks a head kick. Lins is connecting a lot but Arlovski is eating a lot of strikes. The two clinch up with Arlovski up against the fence before they break. Arlovski attempts a spinning back fist that appears to have landed. The pair exchange leg kicks. The round comes to an end.

Round 2: Lins lands a body kick to start the second round. Arlovski lands an inside leg kick. The two exchange strikes with Lins landing a right hand. Lins advances but Arlovski clinches up with him before breaking. Lins is less active in this round. Arlovski sees a head kick blocked before landing a leg kick. The fight is momentarily stopped as Lins lands an accidental kick to the groin. It resumes soon after and Lins is ending the round strong with more activity.

Round 3: The pair return to striking as usual. Lins lands a big body kick. Arlovski lands a leg kick but sees a front kick blocked. Lins misses a head kick. Lins closes the distance and lands some strikes but Arlvoski is yet to get seriously hurt. They clinch up and Arlovski lands an elbow as they separate. The two are starting to swing a lot more. Arlovski has the significant strike advantage in the final round and ends the fight strong.