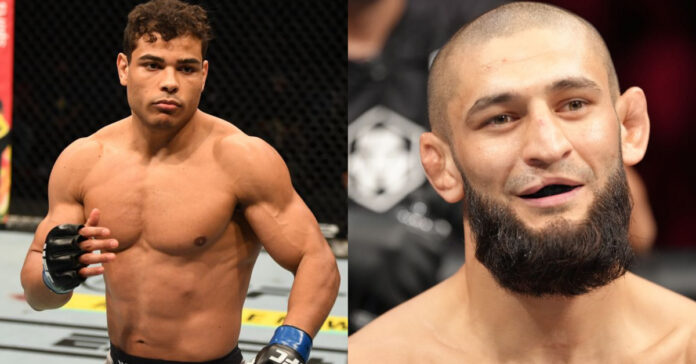 Paulo Costa has been rallying for a shot at Khamzat Chimaev and once again called him out after the latter hinted at a move up.

Chimaev is coming off a dominant finish over Kevin Holland at UFC 279. Initially, he was set to compete against fan favorite Nate Diaz in the headlining bout of the card in a welterweight contest. Chimaev came in seven and a half pounds over the agreed weight limit at 178.5 pounds, needing a shuffle of opponents to keep the event from collapsing.

Following his victory, there were questions about whether he could make the weight again and his future at 170 pounds looked uncertain. Although Chimaev expressed his desire to stay in the weight class he’s a top-five ranked contender in, he took to his Twitter earlier today to tease a potential move to middleweight, writing “185.”

Renowned MMA journalist Ariel Helwani weighed in on Chimaev’s cryptic message, tweeting: “If Khamzat is really off to 185, it’s gotta be Khamzat v Costa next. Easiest booking ever.”

Costa responded to Helwani’s tweet, agreeing with his suggestion of pitting him against Chimaev using a bunch of emojis.

The cupcake one is a reference to the nickname Costa has coined for Chimaev, ‘gourmet Chen Chen,’ and the hat emoji notes Costa’s claims of taking Chimaev’s hat.

Following Chimaev’s weight miss at UFC 279, company president Dana White theorized that a move up to middleweight would be the best idea for ‘Borz.’

“Yeah, it’s a problem, it’s a problem that he missed weight,” White told reporters at the UFC 279 post-fight press conference. “We have to look at it and figure it out, but what makes sense is for him to fight at (185). So we’ll see.” (ht MMA Junkie)