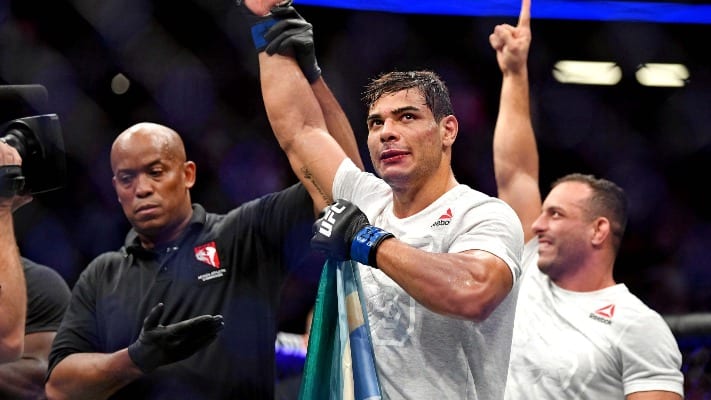 At UFC 243, one of the most anticipated fights of the year goes down in Australia as Robert Whittaker looks to defend his title against Israel Adesanya. It will no doubt be a massive fight, and a fight many fans are looking forward to.

It is a close fight to call for many, as Adesanya has looked unbeatable in the UFC. Of course, Whittaker is the champion for a reason. Yet, Paulo Costa, who appears to be next in line, thinks it is a much easier fight to call, and is picking Whittaker to defend his belt.

There is no question Costa and Adesanya do not like each other. They have traded shots at one another on social media. The Brazilian doesn’t believe “The Last Stylebender” is a real champion and will lose his ‘fake’ belt in October. If Costa is right, he believes he will be fighting Whittaker for the title next. However, he recently had surgery.

“I had surgery on the left biceps tendon,” he said. “It was an old injury. I had to fight with 50 percent of the ruptured tendon against Romero because I didn’t have time to have surgery before the fight. Now that the fight has happened, it was the ideal time to perform surgery because I will have time to recover and return 100 percent to challenge for the belt.”

In the end, Costa is rather confident he was what it takes to beat either of them and wants the Whittaker fight to happen by the end of the calendar year.

“I will be out for just three weeks and I can fight again in December,” Costa said. “I will wait to fight for the belt. This is my time. I am next.”

Do you agree with Costa’s prediction for Whittaker vs. Adesanya?