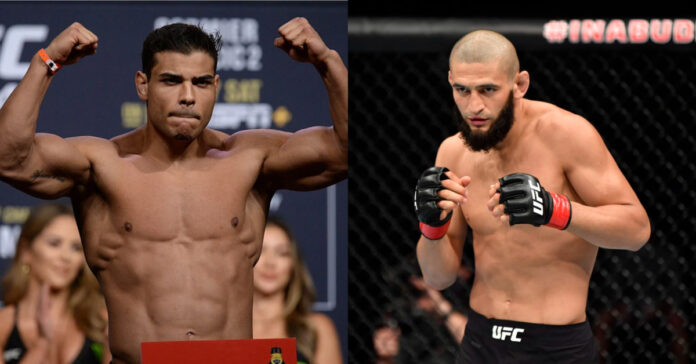 UFC No.6 ranked middleweight Paulo Costa has stated that Khamzat Chimaev is afraid to show his face following an altercation at the UFC’s Performance Institute during UFC 279 fight week.

Khamzat Chimaev is set to face Nate Diaz in the main event of UFC 279 at the T-Mobile arena in Las Vegas, in what is expected to be the Stockton-natives final appearance inside a UFC octagon. Despite having the spotlight very much upon him as he main events a UFC PPV for the first time, Chimaev did not hesitate from exchanging in a fiery war of words with Brazilian middleweight Paulo Costa.

Following the pair’s interaction, Paulo Costa believes the undefeated prospect is afraid of him and that, during their confrontation, he truly did not want things to escalate into a fight. Speaking to TheMacLife, Costa revealed that he felt Chimaev was simply playing up for the camera, and had he wanted to, the pair could have settled their differences there and then.

“It was just me, Jake Shields, and Tamara, my girlfriend. But he was not there to fight, he just wanted to talk some s***. And now he is hiding. I came here for a couple of days after that, maybe he’s hiding in some cave, some hole, I don’t know. I didn’t see him anymore.” (Transcribed by MirrorSport)

Following on from his battle with Luke Rockhold at UFC 278, Costa has expressed his interest in a potential matchup against the No.1 ranked middleweight contender Robert Whittaker.

Costa is heading into the final bout on his contract and therefore would like to have the opportunity to make a statement in what may potentially be his final matchup inside the promotion if he does not choose to re-sign. The Brazilian kept it short and sweet when asked about a potential matchup against the Australian after the former-interim champion expressed an interest in jumping up into the light heavyweight division.

‘Robert Whittaker is a very good fighter. I think he says he wants to move up to 205 but I hope he is able to fight me before that. If he decides to move right now, I respect him.”

How do you see that potential matchup playing out?