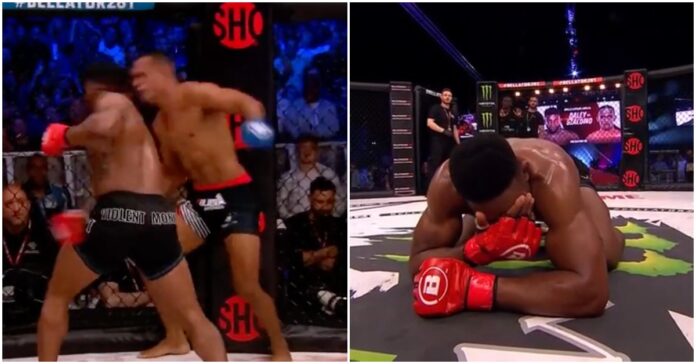 After undeniably losing the first round and a half of his final pro MMA fight, Paul Daley exploded into action, knocking out his opponent in truly emphatic fashion at Bellator 281.

Daley walked out to a rapturous crowd in the SSE Arena. However, things did not initially go to plan for the former Strikeforce, UFC and Bellator veteran. His opponent, Wendell Giacomo, was able to out grapple him for the entirety of the first round, and even appeared to come close to securing a leg lock.

‘Semtex’ opened up at the start of round 2, but a reckless flying knee saw him once again brought to the ground. However, Daley climbed back to his feet, and suddenly unleashed a barrage of punches. Giacomo could do nothing more than collapse to the canvas, as one of the hardest p4p hitters in MMA did what he does best.

Below, catch the highlights from Paul Daley’s final MMA bout: