LowKickMMA.com
Home Bellator News Patricio Pitbull: McGregor Is Too Slow, Has Holes In His Game 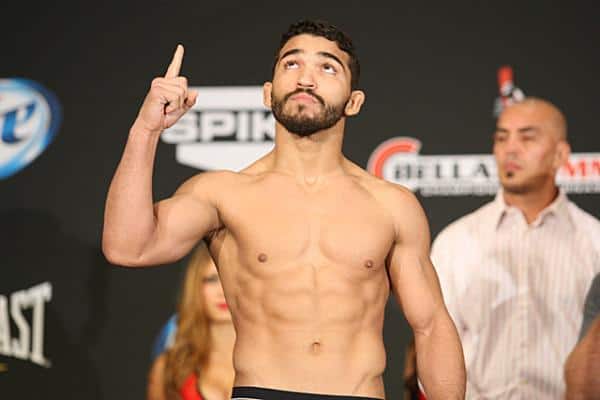 Bellator featherweight champion Patricio “Pitbull” Freire firmly believes that he’s amongst the best 145-pounders in the world, and that was made clear when he said that he would beat UFC champion Jose Aldo a few months ago.

Aldo is currently scheduled to defend his title in the biggest fight in mixed martial arts (MMA) history when he meets interim champion and Irish hype machine Conor McGregor at December 12’s UFC 194. As for the “Notorious” one, “Pitbull” claimed that McGregor wasn’t on his or Aldo’s level, but is more of a salesman:

“It’s the commercial aspect of the business,” Freire told MMAFighting.com. “McGregor isn’t the best featherweight on the planet. The best in the world is Jose Aldo, alongside with me, and everyone knows that. I have the Bellator title, and I’m going into my third title defense, and Aldo has the UFC belt. McGregor is there to promote the sport, and that’s good.”

As for a prediction, Freire put in plain and simple, saying that McGregor isn’t good enough to dethrone long-time boss Aldo. The Bellator champion went on to criticize McGregor’s game, noting that while the Irishman has a plethora of knockouts to his record, he will fail when put up against the best:

“McGregor is a good fighter, has a flashy striking, but he’s not good enough to beat Aldo,” Freire said. “I’m sure he will try to keep it standing and try to talk some trash during the fight. Aldo has a good chin, and it appears that McGregor does too, but McGregor is too slow for this division, and he has holes in his wrestling and ground game. Aldo is too patient, and a guy like that is way too dangerous.

“I don’t think it would be an easy fight for me or Aldo, he offers some dangers, but he’s not good enough so he won’t win,” he continued. “He sells well, has some knockouts over guys that aren’t well known, but that’s not going to happen when you put him against the best.”

Could we see “Pitbull” one day make the jump to the UFC to scrap with the likes of Aldo, McGregor, and the sharks that inhabit the UFC’s featherweight division?