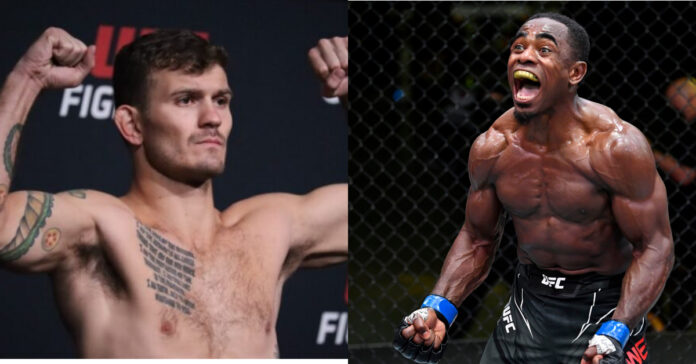 Orion Cosce does not see his upcoming fight with Mike Mathetha going the distance.

Cosce is set to kick things off at UFC 277 when he takes on Mathetha in the first fight of the night. Coming off his first-ever pro loss against Philip Rowe in Jul. 2021, “Galaxy” will go into the bout looking to get back to winning ways.

In an interview with LowKick MMA’s Alex Behunin, Orion Cosce broke down his upcoming fight with Mathetha at UFC 277.

“I think very highly of him, he’s a very well-decorated striker from where he is,” he said. “I don’t know because there’s a couple different websites with a couple different records, I have people sending me sh*t all the time so I just tell them, I’m like, ‘yeah, I get it. He’s a very well-decorated striker,’ and he is but I could tell that he needs to work on his wrestling and his ground game a lot. I know that he has one submission win I believe in like an Asian circuit.

“But I haven’t been able to see any of his other fights. It’s the only fight I was able to see of his was against Jeremiah Wells and that’s not really much to go off of.”

Cosce believes Mathetha will be looking for a finish as well

Cosce is respectful of his opponent’s striking abilities and believes he’ll try to secure a finish as well.

“I expect him to come out, try to get the knockout, swing hard, and try to keep the fight standing the best he can. I definitely respect his striking. He has that power to knockout anybody as long as he is able to keep it on the feet.

“I definitely recommend him to be ready for me to come out striking and grappling as well because I try to mix it all up together.”

“This fight’s not going to go to a three-round decision,” he added. “I won’t let it, he’s not going to try to let it so everyone should be expecting a finish.”