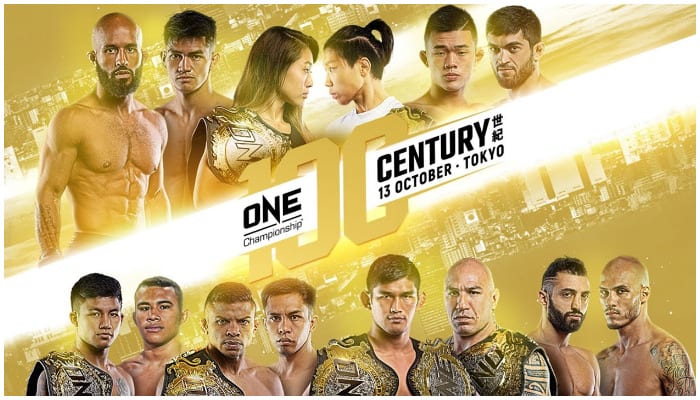 ONE Championship will hold their biggest ever event this weekend with ONE: CENTURY set to take place in Tokyo, Japan. The blockbuster event is made up of two separate cards.

Fans then have just enough time to restock their snacks before ONE: CENTURY PART II begins. The prelims for the second part will start on B/R Live at 4:00 am (EST), while the main card will begin at 6:30 am (EST) on Sunday, 13 October.

ONE: CENTURY PART I will be headlined by an atomweight title clash between defending championship Angela Lee and China’s Xiong Jing Nan. The pair last fought in March at ONE: A New Era, when Lee unsuccessfully attempted to capture Xiong’s ONE Women’s Strawweight World Title. Now the pair will face off once more, only this time the tables have been reversed.

The co-main event of the first card features Demetrious Johnson and Team Lakay’s Danny Kingad battling it out to be crowned the ONE Flyweight World Grand Prix Champion. Johnson will go into the bout the overwhelming favorite, but Kingad is a dynamic striker and “ Mighty Mouse” will need to be at his best to ensure he leaves Japan with a victory.

After three bouts, the rivalry between Brazil’s Bibiano Fernandes and the Philippines Kevin Belingon will finally come to an end when they clash for the fourth time. Fernandes, the reigning ONE Bantamweight World Champion, is confident that he has Belingon’s number figured out and the Brazilian is confident he will be the last man standing when the dust settles.

ONE Super Series fans are also in for a treat when Italy’s Giorgio Petrosyan and French-Algerian Samy Sana face off for the right to be called the ONE Featherweight World Grand Prix Champion.

ONE: CENTURY PART I