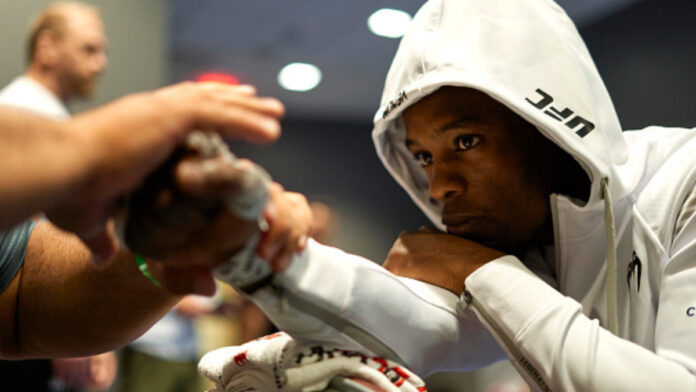 Here at LowKick MMA, we recently had the chance to catch up with Ode Osbourne while he was refining his skills in the gym ahead of his Tyson Nam fight at UFC San Diego.

Among talking about things like his spiritual faith, Osbourne discussed how he’s “At peace” leading into this fight. While also discussing his change in weight classes and how it’s benefitted him so far.

“I feel at peace,” Ode Osbourne told Lowkick MMA’s Alex Behunin. “I feel like I’m finally coming together… It’s like climbing a mountain man, its been good. The move out here (to Las Vegas) was definitely worth it.”

When asked about his change of weight class, and the current winning streak he’s on, Ode Osbourne gave all glory to god: “I really had to focus, and it sounds weird, but I really had to submit to god… That’s where change happens because I’ve been fighting (it), walking upstream for so long, my entire life. Ive finally put it all in god and let him take care of it. And since then, Ive been like a hot-knife through butter.”

‘The Jamaican Sensation’ would go on to elaborate on spreading the word of god. Saying it would be selfish of him to keep the word of god to himself. Later on, Osbourne and Behunin would touch on the change of weight.

“The reason why I went down to being a flyweight is because there’s less guys at flyweight division. Getting a belt at flyweight will be quicker then getting a belt at 135lbs. You could be sitting in the 135lbs division for three years to crack the top 10. Where as flyweight, you get three good wins in, and you’re top 10, top 15.”

“I have this light in me,” Ode Osbourne continued. “I just wanna shine that thing bright, because there’s so much negativity. I want when my kids see me, and when people of the world see me on TV, they just start smiling. They’re like ‘Man, look at that dude Ode Osbourne, he’s just so positive’ I just wanna smile… Shine that light bright for everybody… Not just for the Jamaican kid, the African kid, the Mexican kid, the Chinese kid. Every kid in the world. I want everybody to see me doing what I’m doing, and just become exuberant, just become happy…”

“I am extremely excited…” Ode Osbourne began. “I know Tyson Nam is a very seasoned opponent and I’m not looking past him. He’s dangerous, he’s got a nice cross. He’s knocked out all the same guys I’ve knocked out… Two knockout artists going against each other is going to be phenomenal. But, I’m gonna set one thing straight. I know what I possess and I’m going to go in there looking to finish him.”

‘The Jamaican Sensation’ laughed when asked about the matchup. “It couldn’t be a better matchup,” He said. Signaling out the knockout power both of them possess as an indicator this fight will be wild and entertaining.

READ MORE:  Exclusive | Mackenzie Dern on the benefit of having teammate Tabatha Ricci competing on the same upcoming card

To see the full interview, check out the video below!