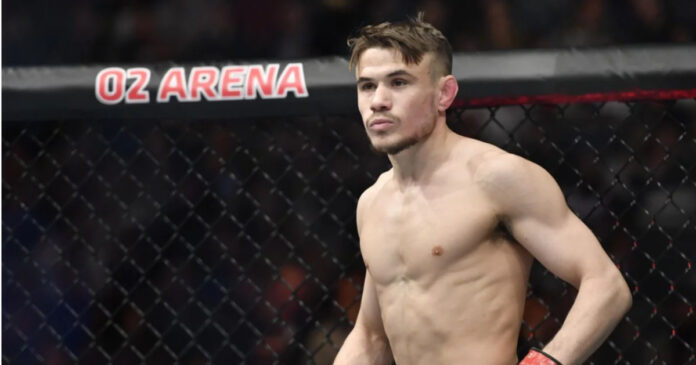 Former Cage Warriors bantamweight champion, Nathaniel Wood, is looking to make an emphatic performance in his long-awaited return to competition when he takes on Charles Rosa this weekend.

Fans of the UFC have not seen the 28-year-old fight since October of 2020. A slew of opponent pullouts and injuries have limited the Englishman’s ability to advance his career in any meaningful way. However, this weekend, after nearly two years out, Nathaniel Wood will take on eight-year UFC veteran, Charles Rosa.

Talking to LowKickMMA.com, Wood expressed respect for Rosa, but his eagerness to return to the octagon was obvious.

“Obviously, he’s game,” Wood began. “He’s very very game, he’s been in the UFC for many years and he’s obviously very high level. To be in the UFC you have to be high level, to be there that many years you’ve got to be even better.”

‘The Prospect’ also notes that considering Rosa’s reputation and fighting style, he could see a bonus being thrown his way from UFC president, Dana White.

“I’m excited for the fight, excited for a game opponent, he doesn’t come and put on a boring show, so I’d like to think there’s a nice 50gs in it for us. It would be a pleasure to share it with him, there’s no animosity my end, but I will be looking to take his head off, on Saturday night.”

Earlier this year, Wood would announce that he had signed a brand new, four-fight deal with the UFC, the Rosa fight will be the first of which.

Wood also announced at this time that he would be moving up weight classes to featherweight. Although the past two years have been tough for Woods, it seems that we will be treated with more action from the promising Englishman.

“Training’s been amazing. Obviously going up in a weight category has been a weight off my shoulders. It’s meant that this camp I’ve actually been able to focus on my opponent as opposed to purely cutting weight.”

How do you see Nathaniel Wood vs. Charles Rosa playing out?