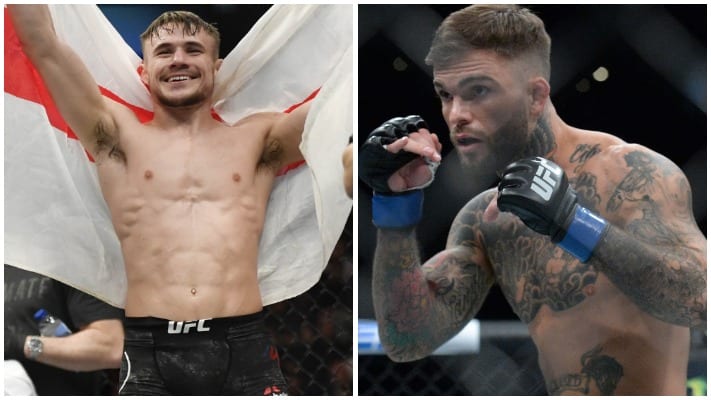 Bantamweight prospect Nathaniel Wood has been chasing a fight with Marlon Vera since joining the UFC last year.  Vera was the last man to defeat Brad Pickett – who coaches 25-year-old Wood.

Many believe the pair will square off on 21 March 2020 at UFC London but “the prospect” isn’t so sure. Speaking on the MMA Fighting Eurobash Podcast he expressed doubts about the fight. (H/T MMA Fighting)

“I’d like to think it’s going to happen, but I don’t think that he wants to fight. He said, ‘I’ve got the pen ready and all of that’, but he said that a year and a half ago and nothing’s happened from it.

“He said to me once on Twitter about fighting me, I had set a date and he said, ‘No, you do nothing for me,’ and that kind of stuff. I just said, ‘Fine, whatever,’ and then he went and fought a guy that I had just beat, a guy that I beat last year, he’s only just gone and fought him. That just leaves me in confusion – do you want to step up or not?

Former Cage Warriors Champion Wood is beginning to look elsewhere for opponents and Cody Garbrandt is top of his wish list.

“If he doesn’t want to fight, me versus Cody – I’d love to have that fight. That excites me. He’s obviously ranked a lot higher than me at the moment, but then, he’s on a three-loss streak and I’m on a three-fight win streak. To me, for the UFC, it’s win/win. If he beats me, cool he’s back in the win column. If he doesn’t beat me, as far as I’m concerned, the UFC has a new title contender.”

Do you think Nathaniel Wood is ready to take on ex-champ Cody Gardbrandt?